The exciting thing about attending a conference like Novelists’ Ink is that I always end up with so many action items. Novelists’ Ink is also unusual among the conferences I attend because it’s only for published authors, most of whom write genre fiction. (A high percentage of members write either romance or mystery.) So, there are no reader events like booksignings during the conference (although Jodi Vaughn and I made an exception and met with some readers for lunch on Saturday. It was such fun – Jodi is lovely and it turned out that her fans were also some of mine!) So, NINC is about the business of publishing. In this still-changing market, there are not only new options available, but better ways evolving to get things done. I always end up making lists on the flight home. You’ll notice some changes happening as a result of what I’ve learned this past week, although a number of them will happen behind the scenes.

You’ll notice some changes happening as a result of what I’ve learned this past week, although a number of them will happen behind the scenes. For example, I need to review my notes from Erica Ridley’s wonderful session on newsletters, and decide what to improve first with my monthly newsletter. (There are LOTS of things to be improved there!)

I’ll also be changing the numbering of the Dragons of Incendium series. Amazon doesn’t allow incremental numbers on series pages and I’ve been stubborn about changing my idea of the book numbers to fit theirs. 🙂 In talking to other authors, though, it’s clear that there are tangible benefits to having all of the books on the same product page. I’ll make them the same at all portals once they’re reformatted. The short stories will be given whole numbers in this arrangement, so the book order will become:

I’m going to commission new covers for my time travel romances, and probably move Love Potion #9 over to the Deborah Cooke side of things. It is a contemporary paranormal romance, after all. I do love the cover image, but it doesn’t communicate the subgenre clearly enough to do its job well – if you love this cover and want a print copy, grab it soon!

There are dozens of other tweaks and changes to be made. I attending workshops with tips on productivity and on strategies for publishing. I learned about conferences that I haven’t attended before and revisited the idea of attending some others again. I’ll let you know when any of these items impact what you see on your end of the publishing biz.

The second exciting result of going to conference is meeting new authors. I always meet some authors I haven’t met before and learn a bit about them during the conference, then come home with a huge shopping list so I can become acquainted with their books. No matter how avidly I read, there are always new voices and new fictional worlds to be discovered – that I’ve sat with the author in a workshop or had lunch with him or her is icing on the proverbial cake. I’ve already added a dozen books to my reader and am looking forward to digging in. When I find some I particularly love, I’ll share them with you here.

The third and maybe the biggest benefit is creative. Walking the beach is certainly a contributing factor, plus I went offline for the week. I came home from NINC recharged, with my imagination full of new stories. I did a lot of plotting, which surprised me but that’s all good. I also have more ideas to connect my existing stories with each other. I have started to do this (as some of you have seen in A Duke By Any Other Name) but the possibilities multipled for me when I gave them the opportunity. 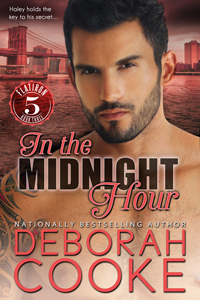 For example, I need a tattoo artist based in New York for the Flatiron Five series and realized that Rox’s tattoo shop, Imagination Ink, which we encountered first in Whisper Kiss, is in NYC. Rox has a partner and friend named Chynna (as well as one named Neo). I decided that Chynna would be perfect. She’ll turn up at F5 in Damon’s book, In the Midnight Hour and become a continuing character in that series. Flatiron Five doesn’t have any paranormal elements, but Chynna isn’t paranormal. Even Rox isn’t paranormal herself—she’s just partners with Niall, a dragon shifter. This kind of cross-pollination between series is particularly fun—I went back and read what I’ve said so far about Chynna and got excited about the possibilities. I remembered writing a scene with Chynna that didn’t make it into the final book and had to hunt it down. I posted it as an out-take right here so you can meet Chynna. (She doesn’t actually appear in Whisper Kiss.)

There are wonderful plans in the works already, and I’ll share them with you as soon as I can!

Since we’re talking about conferences and reader events, tell me whether you attend any reader events. If you don’t go to reader conferences or events, is there a reason why? (Some readers like to save their money for books, which is good, too.) If you do go, where are the events located? Do you attend for workshops or signings or both? What’s your favorite part?

One thought on “Home with Lists”