Today, my guest author is Erica Monroe, who has a Regency romance novella in Charmed at Christmas, one of the Christmas at Castle Keyvnor anthologies. Please welcome Erica!

My heroine Felicity Fields of THE DETERMINED DUCHESS (available in Charmed at Christmas) practices alchemy, a chemical and speculative philosophy that aimed at transmuting metals into their base elements. Much of alchemy focuses on transforming common substances into substances that have great value, like gold, as discussed below. While much of modern science can trace its roots back to alchemy, chemistry is probably the most notable, and in fact until the 1830’s scientists were oft called “chemists” or “natural philosophers,” regardless of what they studied. In fact, Isaac Newton’s alchemical papers have now been found and portions can be viewed online, as well as in museums.

Though alchemy has an ancient history that spans across several continents and centuries, by the Regency alchemy had fallen out of favor and was no longer viewed as a “real” science. Instead, scientific research moved more toward chemistry, galvanization, and astronomy. Alchemy began to be viewed as a form of witchcraft, and many scientists were in a hurry to distance themselves from being seen as pseudoscientists.

I had a lot of fun depicting the Regency disdain for alchemy. Felicity faces scorn on two fronts because not only is she a woman dabbing in subjects many thought were better left to men, but she is actively pursuing alchemical experiments that have now become taboo. Christy Carlyle and I got the idea that we’d both write scientists, but we’d have them at odds with each other. Septimus Locke, the hero of A LOVE FOR LADY WINTER, is pursuing galvanization, and he views Felicity’s attempts to recreate the Philosopher’s Stone as absurd and pointless. (You can read Christy’s excellent novella in Enchanted at Christmas.)

The Philosopher’s Stone is perhaps the most famous and intriguing of alchemical works, and so when I wrote THE DETERMINED DUCHESS, I had to include it. To fans of Harry Potter, the Philosopher’s Stone probably sounds familiar. In J.K. Rowling’s HARRY POTTER AND THE SORCERER’S STONE, she reinvents the work of famous alchemist Nicholas Flamel. (The British title of this book is indeed HARRY POTTER AND THE PHILOSOPHER’S STONE, off of Flamel’s work). For many alchemists, the Philosopher’s Stone represented the ultimate triumph – not only on a scientific level, but also on a spiritual level. It was thought that if one was able to take the stone through the three stages of transmutation – Black Phase, White Phase, Red Phase—you’d be able to unlock the mysteries of the universe.

Felicity doesn’t care about using the stone to transform simple materials into gold. She’s after the Elixir of Life that one can supposedly make from the stone. The Elixir of Life has many interpretations throughout both Eastern and Western philosophy, but I chose to focus mostly on the work done by alchemists in Europe, as that is what Felicity would have had access to. The Elixir of Life is said to have granted Flamel and his wife eternal life, and it contained healing properties as well.

Because of the Elixir of Life’s special properties, Felicity hopes to use the stone to bring back her beloved guardian from the dead. (THE DETERMINED DUCHESS is my take on Mary Shelley’s FRANKENSTEIN, make of that what you will). It was a challenge to balance Felicity’s alchemical experiments with her very real grief over her guardian’s death—science has always been her touchstone, so she sees it as a way to make sure that she is never abandoned again, and she thinks she owes her guardian a second chance at life.

Will she succeed? You’ll have to read CHARMED AT CHRISTMAS to find out. 😉

For more information on alchemy, you can check out my story board on Pinterest.

Erica Monroe is a USA Today Bestselling Author of dark, suspenseful historical romance. She was a finalist in the published historical category for the prestigious Daphne du Maurier Award for Excellence in Romantic Suspense, and her books have been recommended reads at Fresh Fiction, Smexy Books, SBTB, and All About Romance. When not writing, she is a chronic TV watcher, sci-fi junkie, and comic book fanatic. She lives in the suburbs of North Carolina with her husband, two dogs, and a cat. Visit Erica online at ericamonroe.com and sign up for her new release newsletter at: bit.ly/mlem4. 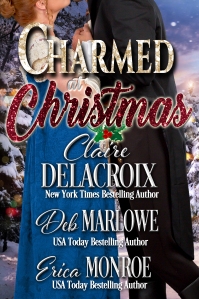 Charmed at Christmas
includes Erica Monroe’s The Determined Duchess
After the death of her beloved guardian, Miss Felicity Fields is left alone with an uncertain future. But this blunt bluestocking has a secret: she’s determined to resurrect her guardian through the ancient art of alchemy. The last thing she needs is the return of Nicholas Harding, the Duke of Wycliffe and rightful owner of her home on the wild coast of Cornwall. He stirs an unexpected passion within her, and Felicity has had enough change in her life.
When they were children, Nicholas never understood his aunt’s brilliant but unemotional ward, or her many scientific studies. Now, he’s determined to bring Felicity to London so that she may make a match within society–except he can’t stop thinking about her. But with the line between life and death blurred by Felicity’s experiments, can he convince her that she’s no longer alone, and her proper place is by his side?