Today my guest is another of the authors participating in the Christmas at Castle Keyvnor anthologies. Please welcome Claudia Dain!

There’s something about having a lot of time on your hands, about unending leisure time, that feels . . . wrong. Maybe that’s my middle class values showing, but for this story, I wanted my hero to have A Job. Oh, yes, he’s an aristocrat and he’s not hurting for money (because that’s more fun than being broke) but he does have Goals and Dreams and he is determined to run a profitable business venture in Regency England. He is going to own the best coach/cross-country horse breeding stable and the best hunting dog breeding kennel in England; that is his goal.

In researching horse breeds, I stumbled across the Trakehner. Originally developed to take knights into battle, by the 16th century, this horse had been refined into an elegant coach horse. It had a bold, fearless nature that made it perfect for the cavalry. Did you know any of that? I didn’t. Doesn’t that sound like the perfect horse for an elegant aristocrat in 19th century England to breed? I thought so. Trakehners are known for being highly courageous with an ideal temperament, a horse of great stamina and endurance. Just what we’d all like our heroes to be.

Of course, my hero, Charles Grimstone, Earl of Snowingham, is all of that and more. He is the inheritor of the Grimstone ring. To him, it’s just a family heirloom, with a family myth of Vikings and Valkyries to go with it. He wears the ring at all times, as family legend insists he do, but when the ruby in the ring begins to glow when he enters Castle Keyvynor, and then the power within the ring explodes when Lady Rose Hambly appears, Lord Snow begins to realize that there might be more than myth to the legend, and more fact behind the legend than he’s been willing to admit. Until he meets Lady Rose.

Writing stories with a paranormal element isn’t what I usually do. Castle Keyvnor is the setting for stories with a very definite paranormal slant. The whole place is haunted! I honestly didn’t know if I had the mindset for writing a romance set at Castle Keyvnor, and then I found out that I did. I created two ghosts in my first story (Lady Ghost and Lord Death: A Love Story) and I had a lot of fun having them spar with each other while interfering in the romantic life of the hero and heroine. When it was time to sit down and write Lady Rose and Lord Snow: A Wedding Story, I decided to give my ghostly pair something dangerous to come up against. I created the Grimstone ring and the legend behind it. Lord Snow and his ring can destroy ghosts. This time, if the ghostly pair wanted to interfere in the romance of my hero and heroine, they’d risk destruction.

I wish I could tell you where I came up with the idea for the Grimstone ring. As a writer, I normally don’t know where my ideas come from. A good idea just sort of beckons, leading me down a path that looks exciting, and I follow it. The Grimstone ring was a wonderful path into the story of Rose and Snow, and it ultimately plays a significant role in their love story. Do any ghosts pay the ultimate price of the Grimstone ring? I’m not going to ruin my story, or anyone else’s. You’ll just have to read them all to find out.

Have you ever looked at a piece of jewelry and had the feeling it had a story to tell, a past you wished you knew?

Claudia Welch/Claudia Dain graduated from the University of Southern California with a BA in English. While there she became a member of Alpha Phi, one of the oldest sororities in America. A two- time Rita finalist, she has won numerous writing awards and honors since her first novel was published in 2000. She has lived for most of her life in Los Angeles, called Connecticut home for a decade, and currently lives in North Carolina with her husband. 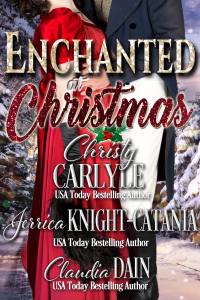 Enchanted at Christmas
includes Claudia Dain’s Lady Rose & Lord Snow
The Grimstone has come to Castle Keyvnor. His name is Charles Snowingham and he is the Earl of Grimstone. Upon his right hand he wears the Grimstone ring, an ancient ring imbued with, it is said, ancient power to destroy ghosts and ghouls and otherworldly things. Snow is not the sort of man to believe in fairy tales, until he arrives in Castle Keyvnor, that is, and he meets Lady Rose Hambly. * Lady Rose is determined to escape her ancestral home, Castle Keyvor. She’s not about to admit it publicly, but there is a certain ghost at the castle who is haunting her. Since her sisters Morgan and Tamsyn are being wed on Christmas, and since the castle will be awash with eligible men, she is determined to find a husband as quickly as possible, if only to get away from Castle Keyvnor and her impossible ghost. * What Lady Rose and Lord Snow do not realize is that the ghosts of Keyvnor want them away from the castle immediately, if not sooner. The Grimstone ring spells their doom, and Rose’s ghost doesn’t want to haunt her just as fervently as she wishes not to be haunted. Will Rose take romantic advice from a ghost who does nothing but insult her? Not willingly.