Last month, I created a free online puzzle of the meme for Just Home for the Holidays. Those who sent me their time for completing the puzzle were entered in a draw for a free signed copy of the book. The books have (finally) arrived – shipping has been really slow! – and we have a winner.

Congratulations to Christine, who was the first to finish the puzzle and report her time. It was a tough one – most people took over an hour to complete it. 🙂

The puzzle is still available. You can find it right here.

Eniko is hosting Cassie over at her blog, Seelk Fire Ice! There’s an interview with Cassie, a review of Some Guys Have All the Luck, and a chance to win an ebook.

Hop on over for your chance to win!

I’m giving away eight Dragonfire t-shirts on the Dragonfire blog! The giveaway is open now, and will end on the 14th.

These are fitted t-shirts for women, and all cotton, with the Dragonfire logo on one side.

Do you want a Dragonfire t-shirt? Here’s your chance to win one! 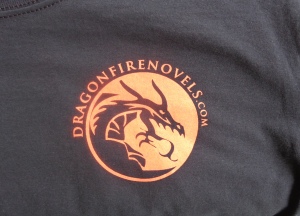 All you have to do for your chance to win is comment on the post for the size of t-shirt you’d prefer to win and tell me which of the Pyr is your favorite dragon shifter and why. Good luck!

If you haven’t commented on the Dragonfire blog before, your comment will go to moderation so you won’t see it right away. I’ll approve them as quickly as I can. 🙂

The rest of the t-shirts have gone to Romancing the Capital for their goody bags.

To celebrate Valentine’s Day, the Red Door Reads authors are hosting a scavenger hunt with a prize. To participate, find this button somewhere on my Claire Delacroix website:

Click on it and you’ll be redirected to a landing page with a letter. That letter is your first clue. The landing page also has a link to the next author’s website in the scavenger hunt. Find all the buttons, collect all the letter, and unscramble the message for your chance to win!

Find all the details on the Contest page at the Red Door Reads website. Good luck!

Last month’s print book giveaway was for a signed copy of Addicted to Love, which is book #2 of my Flatiron Five series of contemporary romances, and Kyle and Lauren’s story. Our winner was Laura.

To celebrate the publication of The Heiress in a new edition, this month’s prize is a signed trade paperback copy of Rowan and Bronwyn’s story.

Comment on this post for your chance to win a signed trade paperback copy of this book.

The contest is open to readers in the US, Canada, Australia, New Zealand, UK and Ireland.

Edited to add – our winner is Shannon! I loved reading that she’d won the heart of a bad boy…and kept it! Congrats to Shannon and thanks to everyone for playing along.

Last month’s print book giveaway was for a signed copy of The Princess, book #1 of the Bride Quest, in its new edition. The winner was Debra Shutters. 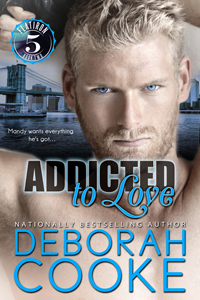 Since we’ve had a lot of medieval romance prizes lately, I thought we’d mix it up a bit this month. This month’s prize book is Addicted to Love, which is book #2 of my Flatiron Five series of contemporary romances, and Kyle and Lauren’s story.

Once upon a time, Kyle and Lauren had a one night stand. Since then, she married and he carried on with his one-nighters—but when Lauren’s marriage collapses and she wants sex with no emotional complications, she knows exactly who to call.

Have you ever been in a friends-with-benefits relationship? Or did you go from friends to lovers? Comment on this post for your chance to win a signed trade paperback copy of this book.

The contest is open to readers in the US, Canada, Australia, New Zealand, UK and Ireland.

I’ll choose a winner on October 1. Good luck everyone!

Edited to add – our winner is Laura! Congrats Laura and thanks to everyone who entered.

As you might recall, I came home from Romancing the Capital 2017 with two extra reader registration bags to raffle off. I posted here on the blog about them and also on Facebook, so I’m have chosen one winner from each place.

On Facebook, our winner is Catherine F – who had been booked to attend RTC but had to cancel due to a death in her family.

Congratulations to both winners. You’re going to have such a good time exploring this huge bag of swag. 🙂

I just had the most wonderful weekend at Romancing the Capital, Eve Langlais’ reader event in Ottawa, Canada. This was the third year for the conference, and it was the third time I’ve attended. The pictures below were taken by Jess Ripley, who photographed the event.

This conference starts with a half-day of panels about writing and publishing. I taught one panel called “I’ve written a book – now what?” which was Eve’s title and a HUGE topic. She had to come and tell me to stop as I was running long. (No matter how carefully I time a workshop by reading it aloud, it always takes longer to deliver in person.) And here I am. 🙂 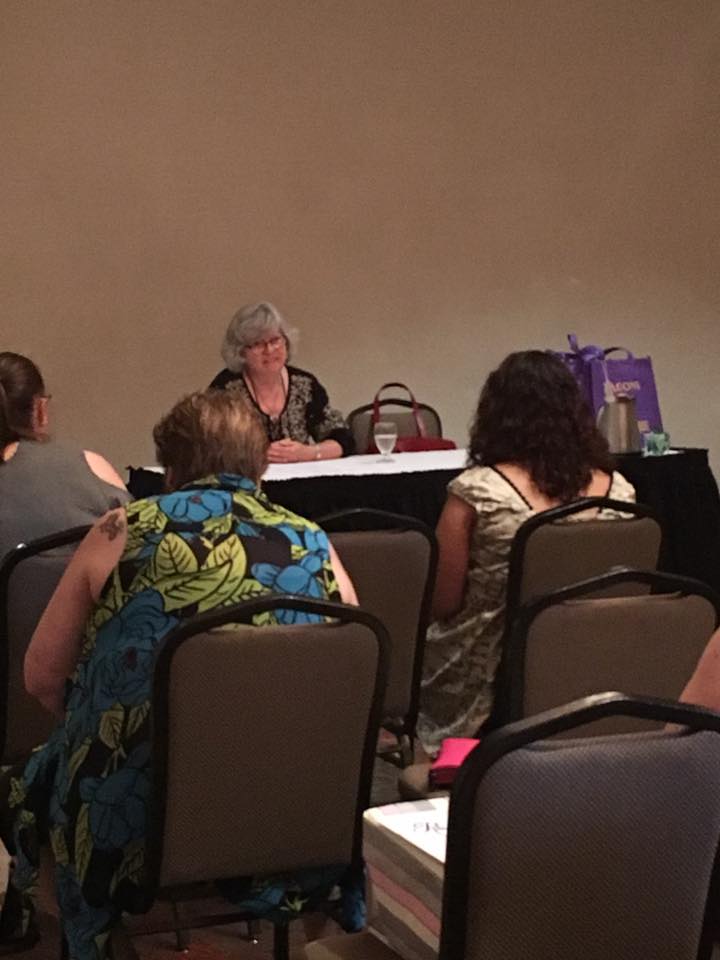 I was on two more panels that day. One was about negotiating with publishers and agents, with Coreene Callahan and Darynda Jones: 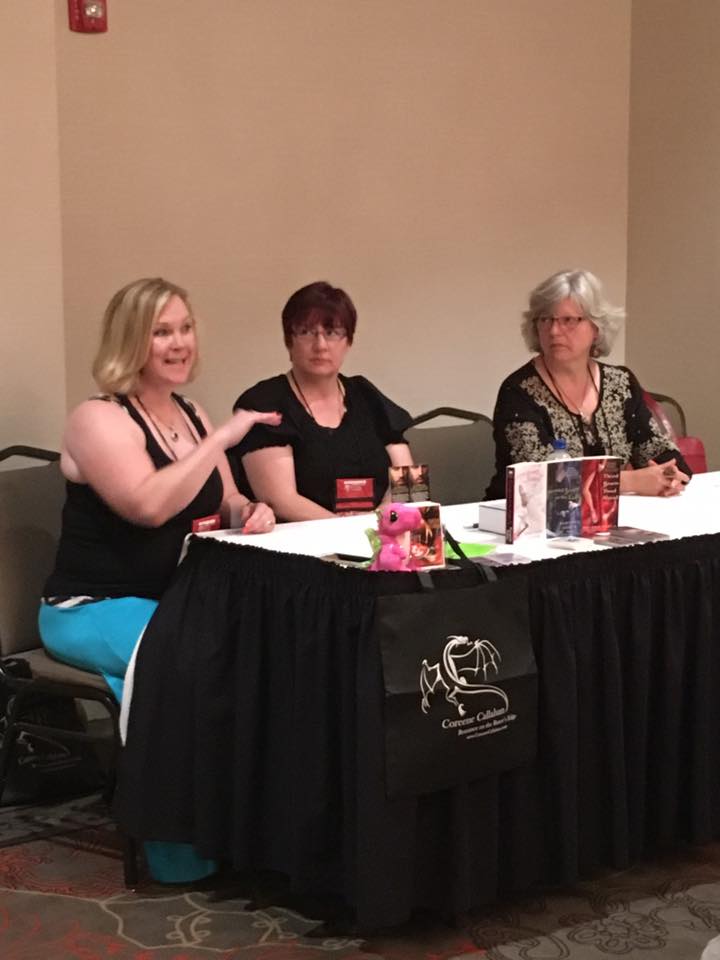 And the second was on the choices available to authors, being traditionally published, indie or hybrid, with ‘Nathan Smith, Elle James, myself and Milly Taiden. It was so interesting to hear all the differing perspectives. 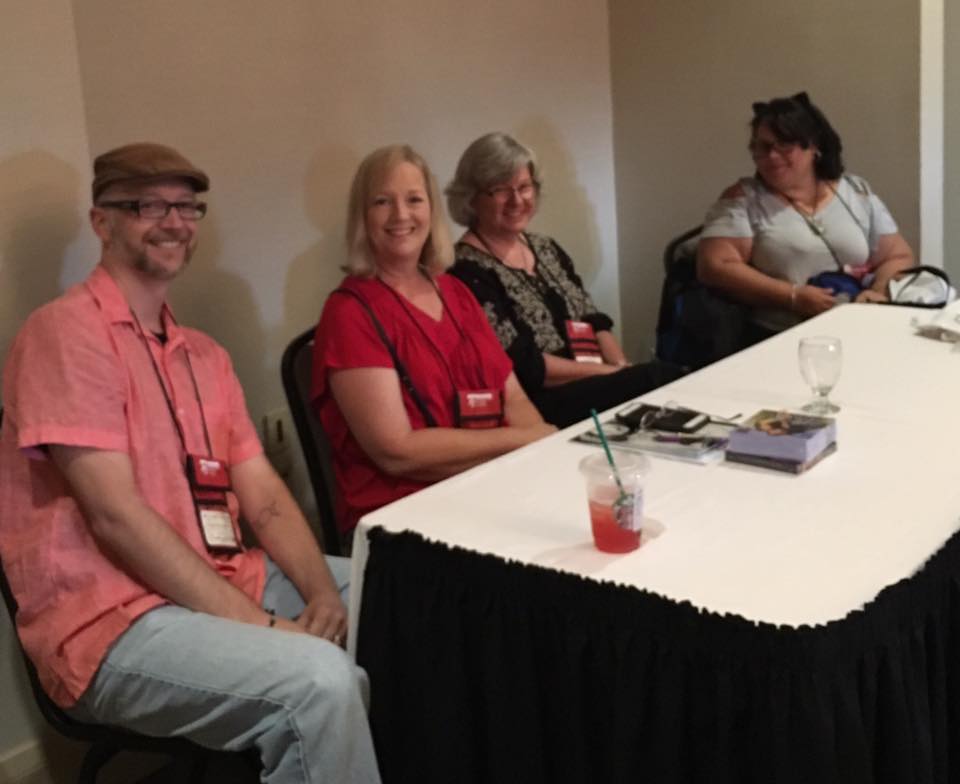 I was on two fun historical romance panels: the first was with myself (as Claire Delacroix), Sharon Page, Anna Markland and Barbara Devlin. 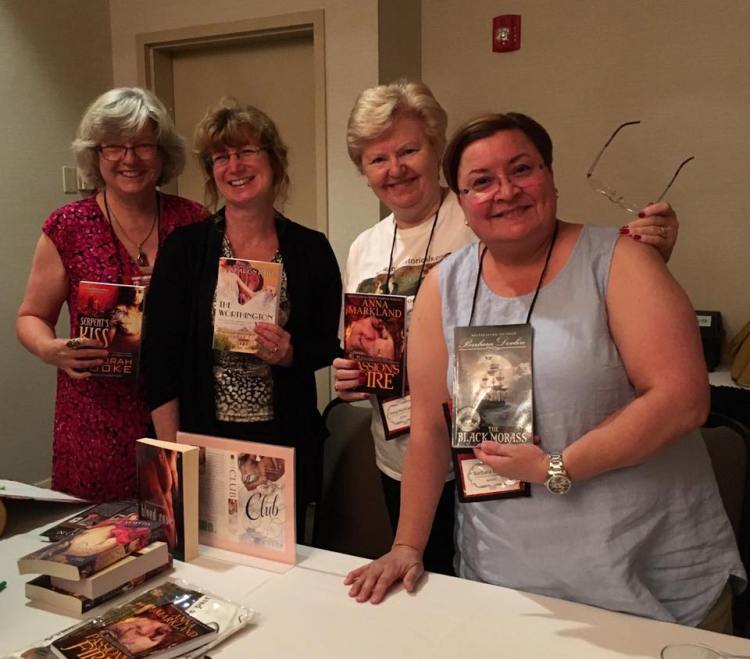 The second was with Anna and Barb again:

I had help at my Knights vs. Dragons puzzle session, from Sharon Page (who continued to wear her tiara, but it really suited her), Mary Ann Abraham and Amy Ruttan. We put together puzzles in this session of my book covers and there are prizes – for the very first time, one of the puzzles was finished by Sophie and her team. It was the new cover of The Princess and I was blown away that they completed it in just 45 minutes. I loved seeing the cover 24″ high, too.

We also had a panel discussion about Dragons! From the left, Coreene Callahan, Eve Langlais, myself and Milly Taiden. Notice that we’re all wearing beautiful crocheted shawls (oops. Eve must have taken hers off. The room was very warm). The pattern is called Wingspan and the reader who created them for us – along with custom dragon pins – was Josée. What a treat and a lovely surprise! (Doesn’t Milly look like she’s making trouble?! She is so cute!) I’ll give you a better look at the shawl on Friday.

I was particularly spoiled at this conf this year. Dayna and Sylvie brought me a personalized gift box with goodies inside. Eniko and Mary Ann made me an armband with a dragon on it and a pair of those wonderful ear wires that look like dragon ears. Eniko also made me a dragon egg of my own. I also finally met both Amanda and Mary, who have been big Dragonfire fans for a long time. they were the first readers to tell me that they were getting Dragonfire tattoos and I saw their matching tattoos this weekend. Mary blew me away by dressing as the Wyvern for the costume ball. That’s the first time anyone has dressed as one of my characters and told me about it, so I got a bit sniffly. 🙂

There were so many great moments. I got to hug Felicia, another Dragonfire fan. Haidee and her daughter came to the conf again this year, which meant more hugs. Brigitte realized I was also Claire Cross and brought her Berkley trade copies of the Coxwells from her keeper shelf for me to sign. (More hugs.) Sharon Page and I (as always) ended up having nachos together, drinking wine and talking about publishing. It’s become a tradition. 🙂 I finally met Barb Devlin and Anna Markland, two historical romance authors I’ve known for ages online. I met the president of ORWA and have my fingers crossed that we’ll work out a date for me to teach at the Ottawa chapter soon. I know I’m forgetting people and apologize for that – it was an awesome weekend, filled with fun.

And then there was the booksigning. As always, it was terrific at RTC – so many books and so much fun! I shared a table with Ashlyn Chase, but once the doors were open, we were too busy to chat. The first pic is before the doors were opened and the second is after.

As in the past two years, Romancing the Capital 2017 was a completely amazing event. I’m really hoping that Eve Langlais decides to host this reader conference again next year. It’s such fun, and we’re getting used to seeing some familiar faces each year – as well as meeting new attendees! As a complete bonus, I came home with plot bunnies. I’m excited to be planning out a new project.

Now, here’s the wonderful part: to celebrate RTC and so you can live vicariously, I have TWO reader registration bags to give away. They’re jammed full of goodies! Please comment on this post and tell me what you love best about reader conferences. If you haven’t ever been to one, tell me why you’d like to attend one. I’ll pick two winners at the end of August. Because the bags are bulky, this contest is only open to readers in the US and Canada. Good luck!

Edited to add – Congrats to ERIN, who is the winner of one of the registration bags. The other one will be chosen from the Facebook comments. 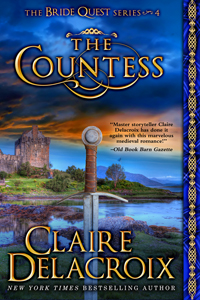 This month, I’m celebrating the re-publication of the Bride Quest as a single series with brand new covers. The new edition of The Princess will be an August release, The Damsel will be a September release and The Heiress will be an October release. The Countess and The Beauty are already available in their shiny new editions, and The Temptress will be republished this month.

This month’s prize book is a signed print copy of the new edition of The Countess. In this story, Eglantine leaves all she knows in France and moves to a remote holding in Scotland in the hopes of giving her daughters a better future—she doesn’t expect to find one for herself, but then there’s Duncan. 🙂

For your chance to win, comment on this post and tell me if you’ve ever made a big move – to a different city, state or country – and why. Good luck!

Edited to add – the winner for July is Marcelle Cole. I loved her story of watching the sun set over and over again as she moved to Korea. Thanks to everyone who participated – the August giveaway is up!

Ignite Your Soul Author Event is a booksigning and reader event that I’ll be attending on September 30 in London, Canada. This month, they’re hosting a promotion and giveaway—and you could win some great prizes.

Visit the landing page to find out more!