I’ve re-arranged the pages on the Claire Delacroix tab a little bit, because I had a wonderful idea.

I told you last month about my upcoming series, The Rose Trilogy, which will be revised versions of three of my books originally published by Harlequin Historicals.  This is a trilogy that was never branded as one, because it developed organically. I sold the first book. I wanted to tell the story of that heroine’s aunt and uncle, who had raised her, which became the second book. Then I wanted to tell the story of the knight’s squire, introduced in the first book, because I liked him – and that became the third book. In revising the books for republication, I planned to strengthen the connection between them, as if the trilogy had been planned in the first place.

The question was how to do that. The first book has action and adventure: the heroine travels to Jerusalem on a pilgrimage with her aunt, then journeys home to France with the hero. The second book is set in France and has paranormal elements: the heroine has precognitive dreams and the hero is a skeptic. The third book is the squire’s homecoming to the Low Countries, and is more humourous. Hmm.

This past weekend, I had a fabulous idea of how to do that. Ha! So, the name of the series has changed ever to slightly to The Rose Legacy, and the page for the series has moved down the tab, to be after the Champions of St. Euphemia. This idea opens up the series, so that it can continue after these three books, which I think is pretty nifty. 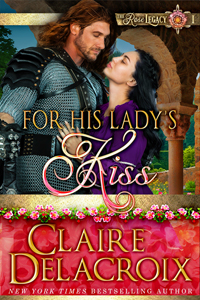 Kim has revised the covers, too, and I’m ready to dive in!

One thought on “Reorganizing”