This choice might be another surprise for you. Today’s pick from my keeper shelf is Dolores Claiborne by Stephen King. 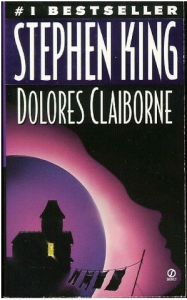 The first Stephen King novel I read was his first book: Carrie was published in 1974 but I read it when I was in high school. I see that the paperback edition I read was the first one, published in 1975, but I didn’t read it until a couple of years later. I was in Grade 9 and I borrowed it from the library. It’s funny to see all the bans against this book, which I read at 13 and no one much worried about it. My favorite King book was The Dead Zone, and I’m surprised that I don’t have a copy on my keeper shelf. I think I wore out that mass market paperback – it was the one published in 1980. The Shining spooked me (as it’s supposed to) and I moved on to other authors. It was years later when a writer friend declared that Dolores Claiborne was King’s best book. I think The Dead Zone is pretty amazing, so I was intrigued and picked up a copy. (I have this one at right, which is a reprint.)

This is a really interesting book, both in terms of story and structure. It’s structured as a confession and is essentially one long scene, written in first person. The protagonist has a strong voice, so strong that her presence is tangible. Her story is one of secrets, and of maybe doing the wrong thing for the right reason. Dolores is accused of killing her employer, a rich woman who visits Maine during the summers and is known to be difficult. Dolores insists that she didn’t kill Vera, but confesses to a different murder—that of her husband, years before. She tells her story out of order, illuminating complex characters and revealing the intricacies of the relationships between them. By the time she explains how she did it, we’re totally on her side that her husband deserved his fate. Don’t start reading this book unless you have time to read it right through to the end. This is a compelling page-turner that holds tight. If you’re a writer, read it once for pleasure, then once again to analyze how King spins his web.

Now I need to find myself another copy of The Dead Zone to decide which I think is the stronger book…I think I know which one I still love best, though.