The other day, I had an email from a reader who wasn’t happy that the Dragonfire covers would be changed for the new editions of the books. I’m not changing the covers to create confusion: I have to change the covers because the original publisher holds the rights to the original covers. When the rights to the book revert to the author, it’s only the book itself (the inside bit) that reverts because that’s the part the author created.

The interesting thing is that sometimes the publisher contracts with an illustrator or photographer for the image for the outside cover. (Other times, people working at the house create the cover art.) When an outside artist is commissioned, the rights to the illustration or photograph can revert to the artist, just the way the book can revert to the author. When this happens, it’s possible that the artist might license the rights to the image to the author for a new edition of the work. The cover won’t be exactly the same, but it can be similar.

The first time I did this was for Love Potion #9, a paranormal romance originally published under my pseudonym Claire Cross. I loved Judy York’s cover art, because it was actually a scene from the book, and was very excited when she agreed to license it to me. Here are the two covers, my edition on the left and the original Berkley edition on the right:

The next time I was able to do this was with the Prometheus Project covers. I licensed the original art for the first three books from the artist Larry Rostant. I love these illustrations, so was pretty excited about that. Here’s Fallen, first book in the series, my edition on the left and Tor’s edition on the right: 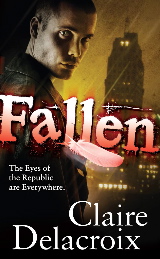 That’s what’s happened with Dragonfire, too. Tony Mauro, the artist who created the illustrations for the first eight books, has licensed those images to me to be used on the new editions. I don’t think you’ll be very confused about which book is which, as a result.

For example, here’s the new cover for Kiss of Fire on the left, and the original mass market cover on the right. We have a new little dragon logo for the series, too. 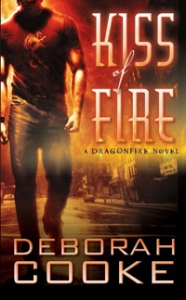