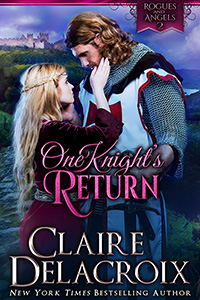 One Knight’s Return will be published May 21.

This is the second book in my Rogues & Angels series of medieval romances. Like One Knight Enchanted, it’s set in medieval Burgundy in an area we’d now call French Switzerland. You can see some pictures of the area on the Pinterest page for the series.

This is also the second of the books I originally published with Harlequin Historicals that I’ve revised for republication. One Knight Enchanted had new scenes and changes to the ending, as well as minor changes throughout from the original book, Enchanted. One Knight’s Return came out of My Lady’s Champion, but has so many changes in the first half that the second half is all new.

The rest of the books in this series will be all new works. You can meet the knights – each of whom will have his own book – in this excerpt from the prologue of One Knight Enchanted.