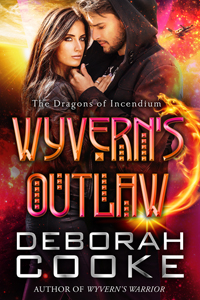 There’s a new free sample in my online store for Wyvern’s Outlaw, coming later this month. It’s the entire first chapter. The same sample is also processing for download at iBooks and should be available this weekend there.

Ryke wants nothing more than to escape the space pirates of the Gloria Furore and go home to his young son. He’s pretended to share their views and has worked his way up the ranks to co-pilot of the Armada Seven, commanded by the most vicious space captain of all. The capture of Princess Anguissa and her ship, the Archangel, is a moment of triumph for his superior—except that Anguissa never plays by anyone’s rules. In a flash of dragon fire, she incinerates most of the crew and takes command of the Armada Seven. Ryke is spared, but he’s not sure why—what plans does the beautiful dragon princess have for his future? And what will she demand to grant his wish of returning home?

There’s also a pre-order link for signed print copies of Wyvern’s Outlaw (which includes Celo’s Quest) in my online store. The store will charge you right away, but the books will ship from me as soon as I receive the ordered copies. That will probably be next week. The link to buy the print edition will go live on Amazon on the on-sale date. This is the same format as the other books in the series, the “mini-book”, which is only available at Amazon or from me.

The buy links are also live for the next short story in the Incendium series. It’s called Celo’s Quest.

In this short story, Celo, the hidden prince who understands the language of wild creatures, unearths a forgotten secret. He accepts a challenge and embarks on a quest, seeking the solution to the riddle beyond the forests of Regalia.

Pre-order Celo’s Quest at these portals.

Subscribe to the Dragons of Incendium newsletter right here.