Do you read tarot cards?

I do, although I used to read them more often than I do now. A tarot card deck has 78 cards: the 56 cards called the minor arcana, plus 22 trump cards called the major arcana. The minor arcana are similar to the decks of 52 playing cards that we use for other games: there are four suits of 14 cards each, with cards numbered from 1 to 10 in each suit, plus “face cards” of a page, a knight, a queen and a king. (In the 52-card decks we use for other games, there are only three face cards: the jack, the queen, and the king.)

I just bought a new deck and am very happy with it.

The oldest surviving tarot cards were created in Italy in the fifteenth century and were painted on commission for powerful families. The Pierpont-Morgan Visconti-Sforza deck is the one I just bought. It’s a reproduction of actual cards that have been preserved. All but four of the 78 cards have survived, although they are in different collections. The Accademia Carrara in Bergamo, Italy owns 26 cards; the Pierpont-Morgan Library in New York owns 35 cards, and there are 13 cards in a private collection in Italy, the Casa Colleoni. These cards are big, at 17.5 by 8.7 cm, and this reproduction is the same size. They were paintings, as well—there are cards surviving from about the same time that were printed from woodcuts.

The four lost cards in this deck are The Devil, The Tower, the Three of Swords and the Knight of Coins, but they’ve been created to make the deck complete, and designed to coordinate with the rest of the deck.  There’s a cheaper version of this deck, but I thought the museum’s connection would ensure the quality was superior. The deck comes in a hinged box with a book of interpretations, as well as the story of the history of the cards.

I thought this deck was beautiful before I received it, and I’m dazzled by the reproduction. One thing is that I’m not sure I’ll be able to shuffle such big cards and work with them for readings. They also don’t have numbers or titles on the higher arcana cards or the suit cards, so it’s a case of working with the cards to recognize each one. It took me a few minutes to realize that the king in each suit is on his throne, the knight is on his horse and the page is on his feet, and that’s how to tell them apart. It won’t take long to become accustomed to it once I have a look at its conventions. I may use it for meditation instead of readings.

When I bought my first deck of tarot cards almost thirty years ago, there wasn’t a reproduction of the Visconti-Sforza available, even though it was obviously known. Maybe the museums and collectors still had to work out a partnership. It was the one I wanted, but instead, I bought the Medieval Scapini deck, which features card images painted by Luigi Scapini and which are clearly inspired by the Visconti-Sforza deck. The cards are smaller and I’ve done a lot of readings with mine. Here are some of the cards side by side.

These are the first four cards in the Higher Arcana – The Fool, The Magician, The Popess (The High Priestess in other decks) and The Empress.

The next four cards in the Higher Arcana are The Emperor, The Pope, The Lovers and The Chariot. 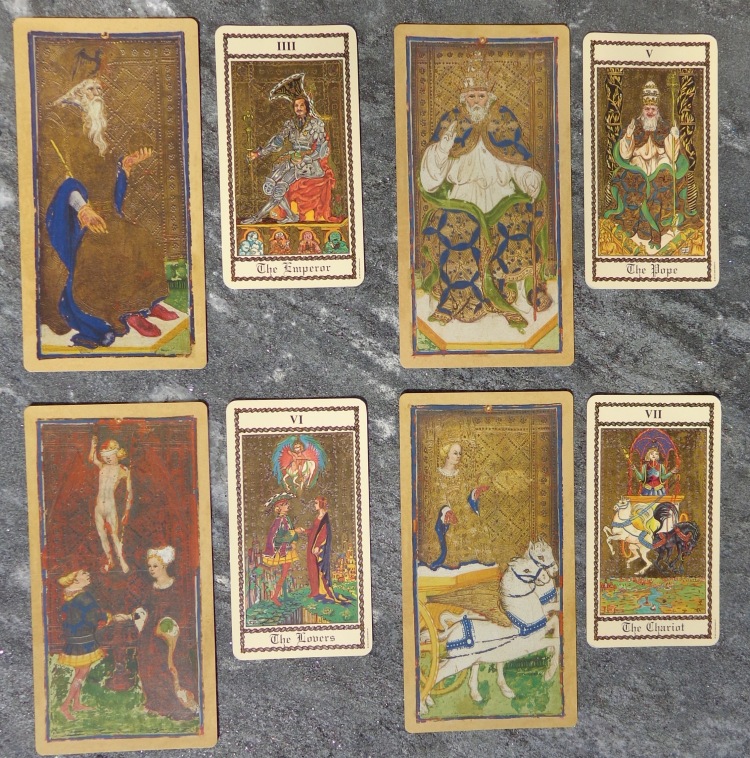 The next four cards are Justice, The Hermit, The Wheel of Fortune and Force.  Notice how different the Force card is. The illustration on the smaller card is more typical now. 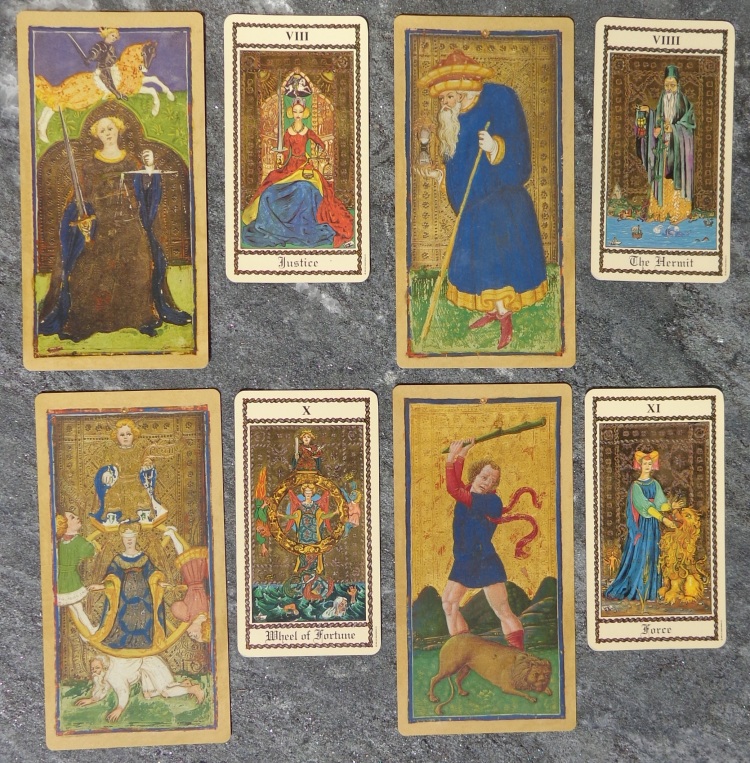 The next four Higher Arcana cards are The Hanged Man, Death, Temperance and The Devil. (The Devil is one of the missing cards in the actual deck.) 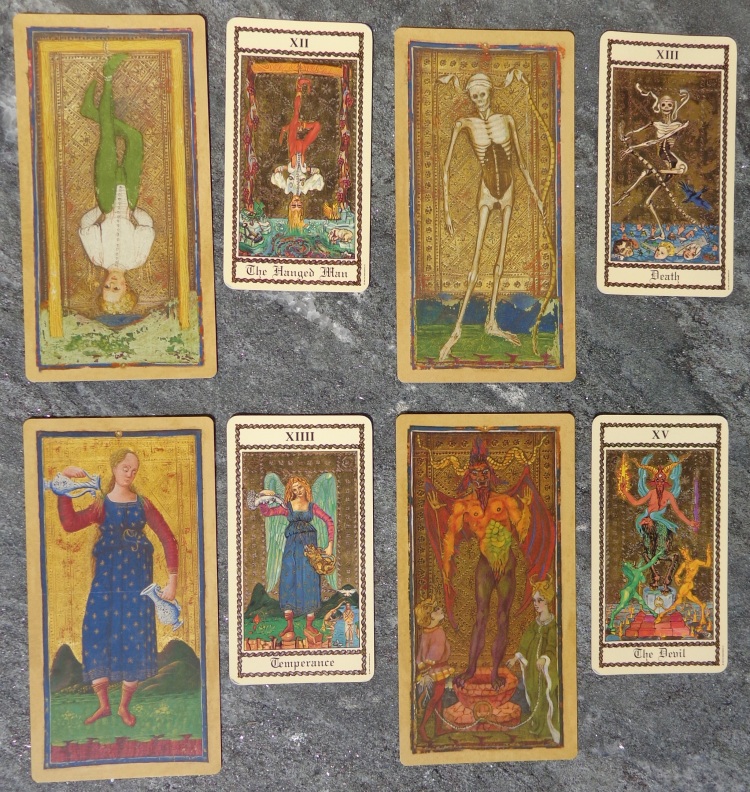 The next four Higher Arcana cards are The Falling Tower (another missing card) The Star, The Moon and The Sun. I love the depictions on The Star and The Moon, which are both different from what’s become typical. (The small cards have more familiar imagery.)

The last two trumps are Judgment and The World. Once again, the illustration on the smaller card is more typical of other decks, but the medieval one is quite beautiful.

The cards have different meanings when they’re reversed or inverted, and I can see that I’ll have to pay attention with the suit cards to be sure I notice their orientation.

This adventure started because Astro Jen sent me a book, which I’m enjoying a great deal. Mystical Origins of the Tarot by Paul Huson discusses (and speculates) on the origin of the tarot deck as we know it. He talks about the Danse Macabre and medieval miracle plays, which is sending me off on another research tangent. I’m familiar with the York cycle of plays, which were performed on Corpus Christi day, as well as some plays adopted by Mummers, like the story of St. George and the dragon. (Alexander and the company from Kinfairlie dress as Mummers and act out this play in The Snow White Bride.) But there are many other medieval miracle plays and I’m having a wonderful time learning more about them.

Have you embarked on any research adventures lately?