This is pretty exciting news for me to share with you! The rights to many of my first published historical romances have reverted to me. I’m giving each of them a heavy edit and making a lot of changes, so will be republishing them with new titles. There will be similarities to the original editions, but a lot of changes, too.

For example, these first three books were labeled by me as a trilogy because they had common characters, but they weren’t originally structured as a trilogy and the publisher never packaged them as one: the Rose Trilogy grew organically, one book at a time. That means that the connections between the books aren’t as strong as they would have been if the series had been planned as a sereis in the first place. One of the things I’m doing in this revision is tightening the connections between the three books. There are other changes too since I’ve learned a few things in 25 years of writing and publishing. 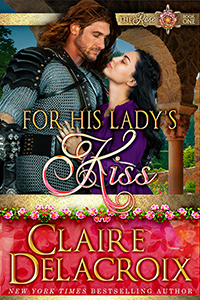 In For His Lady’s Kiss, Alexandria is in peril when she arrives in Jerusalem on pilgrimage with her aunt, only to find the city besieged. To her surprise, the knight who comes to her rescue proves to be Armand d’Avigny, the very man she has tried to forget. Can Armand and Alex build a future in their second chance at love, or will the past drive them apart forever?

For His Lady’s Kiss is a retelling of my book Romance of the Rose.

It’s available for pre-order at Apple and Kobo now, for April 22, 2017 delivery. 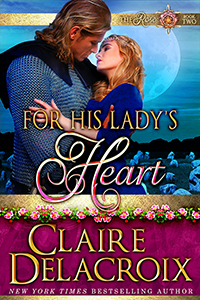 In For His Lady’s Heart, a knight defies convention by courting the outspoken daughter of a vintner, who also is rumored to have arcane powers. Is it destined love that draws Hugues to Sophie, as she insists, or has this beguiling beauty cast a spell over his heart?

For His Lady’s Heart is a retelling of my medieval romance The Sorceress. and is available for pre-order from

It’s available for pre-order from Apple and Kobo for June 22, 2017 delivery. 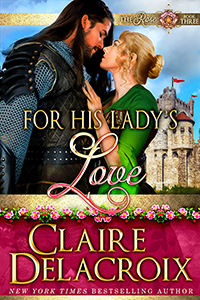 In For His Lady’s Love, newly knighted Roarke d’Aalgen rides out in pursuit of his fortune, only to find love in the most unlikely of places. Can he convince Adela that her distrust of knights is undeserved in his case, and win her heart for his own?

For His Lady’s Love is a retelling of my book Roarke’s Folly.

It’s available for pre-order at Apple and Kobo for August 24, 2017 delivery.

All of the books will be available at all digital portals ninety days before their on-sale date. There will be sample chapters available by that time as well.

I’m leaving the Harlequin Historicals tab as it is to avoid confusion (and because those mass market paperbacks are still out there.) Look under Claire Delacroix for Medieval Romances to find the new editions. Today, The Rose Trilogy is listed, but there will be more. 🙂 I’m also including a note in the cover copy about the previous edition in an attempt to avoid any confusion. All of these books will also be available in trade paperback editions.

Kim Killion did the covers and I think they’re wonderful. What do you think?