There have been a number of questions recently about the availability of my Dragonfire novels, so it seems time for an update.

The first eight Dragonfire novels (Kiss of Fire, Kiss of Fury, Kiss of Fate, Winter Kiss, Whisper Kiss, Darkfire Kiss, Flashfire and Ember’s Kiss, plus the short story, Harmonia’s Kiss) were published by NAL, which is a division of Penguin. My contract with them gives them the right to print and distribute the books, but also defines when those rights return to me. This process is called the reversion of rights. Once upon a time, when a book reverted to an author, it often became unavailable forever, unless another publisher wanted to buy the right to print and distribute them. In this market, though, authors can republish the books themselves. (Yay!) That’s what I’ve done with so many of my historical romances that were previously published–when the rights reverted to me, I republished them in new trade paperback and digital editions myself.

That’s what I’ll do with Dragonfire, once I have all eight books back in my possession.

Rights reversion can be triggered by anything, and the terms are specified in the contract. For these books, the reversion becomes possible when unit sales for the title drop below a certain threshold. That’s a pretty common trigger. Sales had been slowly dropping, as one would expect, but I was surprised by what happened when I published Firestorm Forever last spring. Evidently a lot of people don’t want to begin reading a series until they know it’s complete, because sales shot up for ALL of the books in the series concurrent with that release. This is why the publication of DragonFate has been delayed—I won’t publish any more stories with the Pyr, until the rights to those first eight books revert to me. It’s difficult to manage a series when individual books are managed by different publishers. It’ll all be much simpler when I hold them all again. 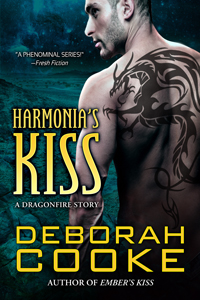 Right now, I have the rights to Harmonia’s Kiss, which has been republished in a digital edition. I also have the rights for Whisper Kiss, Flashfire and Ember’s Kiss. We’re almost halfway! Many of the rights for the Dragon Diaries have also reverted to me – I have all rights to Blazing the Trail, while Allison & Busby retains the rights they acquired to Flying Blind and Winging It.

When a book reverts, the publisher removes their digital edition from sale immediately. They have the right to sell off their existing print stock, but not to print any more copies. So, for those three books, your best chance of finding a copy is to look for the mass market edition, or find a used version.

There are no legal ebook versions at this point of those three Dragonfire books.

When the books are republished in my own editions, they’ll be available in digital editions and in trade paperback, to match the print editions of The Dragon Legion Collection, Serpent’s Kiss and Firestorm Forever, which were published by me from the outset. I’ll also publish the companion volume, Here Be Dragons, along with the new editions, AND put the Dragon Diaries in new editions. Phew! There’s a lot of prep working going on behind the scenes right now! The books will all have to be re-edited and re-formatted and re-packaged. I would like to make them available in audio, as well, but we’ll see how that works out.

The last of my mass market copies of the books are available as signed print editions in my online store.

So, that’s where we stand. I’ll let you know more when I know more. 🙂