Last week, I was in NYC for Book Expo, but I had a little bit of extra time. I spent a good bit of that time at one of my favorite sites in New York, The Cloisters. This museum is part of the Metropolitan Museum and is located in Fort Tryon Park at 190th Street. Here’s a bit from their brochure:

“Welcome to The Cloisters, the branch of The Metropolitan Museum of Art devoted to the art and architecture of medieval Europe. Set on a hilltop with commanding views of the Hudson River, The Cloisters is designed in a style evocative of medieval architecture specifically for the display of masterpieces created during that era. Arranged roughly chronologically and featuring works primarily from western Europe, the collection includes sculpture, stained glass, tapestries, painting, manuscript illumination, and metalwork. The extensive gardens feature medieval plantings, enhancing the evocative environment.

History of the Museum
John D. Rockefeller Jr. generously provided for the building, the setting in Fort Tryon Park, and the acquisition of the notable George Grey Barnard Collection, the nucleus of The Cloisters collection. Barnard, an American sculptor whose work can be seen in the American Wing of the Metropolitan, traveled extensively in France, where he purchased medieval sculpture and architectural elements, often from descendants of citizens who had appropriated objects abandoned during the French Revolution. The architect Charles Collens incorporated these medieval elements into the fabric of The Cloisters, which opened to the public in 1938.”

Just to give you a sample of why I love this place so much, here are some pictures taken at The Cloisters last week. Here I am at the entry.

There are four cloisters incorporated into The Cloisters, and the first one you visit on entering the museum is the Cuxa cloister. This comes from a Benedictine monastery called Saint-Michel-de-Cuxa near Canigou in the Pyrenees and is distinctive not only for its pink stone but for its carvings. The cloister dates from the 12th century and is planted in a style typical of monastic gardens. 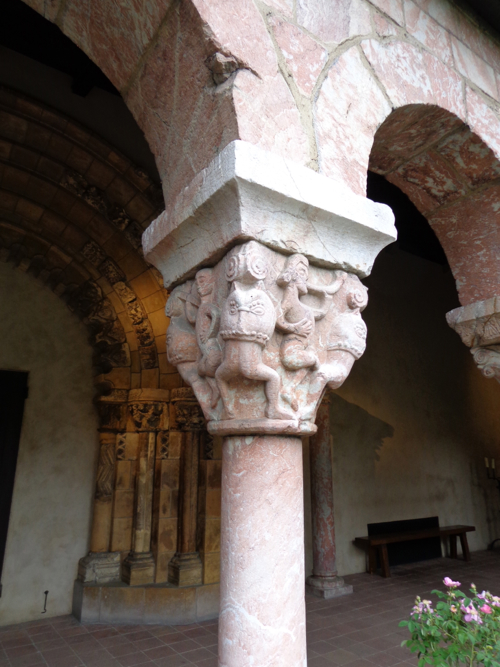 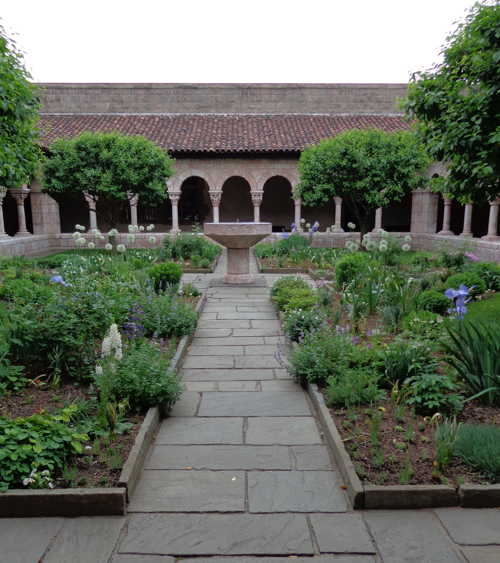 It’s tough to take pictures inside the museum, as camera flashes are not allowed and it was a dingy day. We did manage a few, though. This is the entrance to the Langon Chapel, which includes architectural details from a 12th century church from Notre-Dame-du-Bourg at Langon near Bordeaux. The doorway shows Charlemagne and Clovis as donors of the chapel, so it must have been built on a donation from those kings. The picture is taken from the Saint-Guilhem Cloister.

The artifacts inside the museum are amazing, from sculpture to stained glass to textiles (the Unicorn Tapestries are here as well as the Nine Heroes). There are also marvelous works in the treasury, including boxes in ivory, reliquaries and medieval books of hours. Every time I visit, I notice something new and wonderful. Here’s a window in the Boppard Room, which gives you a glimpse of the stained glass – these windows are from a 15th century convent in Boppard-am-Rhein.

The fourth cloister is my favourite, so I’ve saved it for last. The Bonnefont Cloister is home to medieval plants, planted in an arrangement characteristic of a monastery. There’s a central font, with beds arranged around it, and the plants are sorted according to their use. Dye plants are in one bed, medicinals in another, culinary in another, etc. They’re also supported with wattled fences, which are a medieval garden feature.

In this shot, we’ve just stepped into the garden and are looking right, toward the culinary plants. We’re going to walk to that next corner and stop by the three steps.

This shot is taken from the foot of those three steps. On the right are culinary plants against the wall; on the left in the foreground are dye plants. The two trees growing against the chapel wall at the far end (behind the very modern sign!) are espaliered pear trees. This chapel (the Gothic Chapel) showcases stained glass windows from 14th century Austria. The railing is where we’ll eventually exit the garden. Notice the pots of herbs on the stone wall – there’s rosemary and houseleek and thyme there, as well as one I’ll show you last. Let’s walk toward the yellow sign.

This is a little shy of that next corner, looking back to the door where we entered the garden. Those glorious yellow flowers are woad in bloom – medieval people made a blue dye from woad, a plant indigenous to northern Europe. Even after indigo was available and much admired for the deep blue colour it created, its expense meant that woad was still used. Woad makes a more medium blue colour (sky blue) that fades. 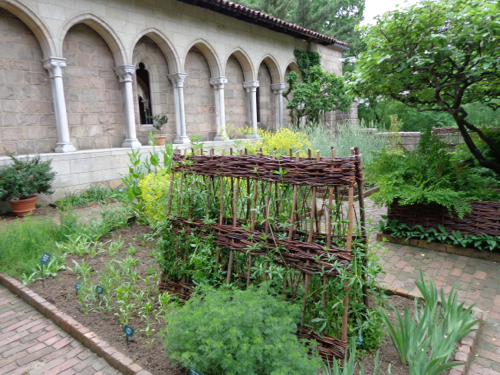 Now we’ve gone to the final corner and are looking back to the font. We’ll leave through the door on the left. The chapel and the pear trees are on our left, out of view. These plants in the foreground are medicinal. The four trees growing in the middle of the garden are quince trees.

Back to the medicinal garden, standing a little closer to the chapel and turned back toward the entry. You can see the low wall on the right (probably south) side. You can see the big leaves of elecampane at the left. 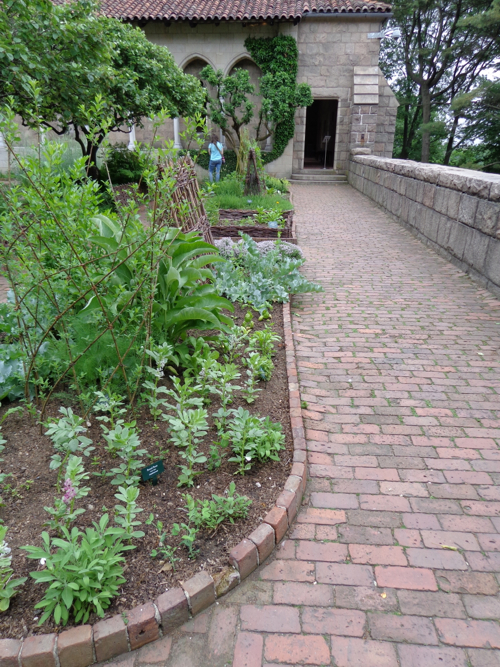 And a very pretty lily, growing in a pot on the wall before we go back inside.

Thanks for visiting The Cloisters with me! You can read more about the museum on their website, right here.

2 thoughts on “Gardens at The Cloisters”