Today, my guest is another author participating in the Nutcracker Reimagined collection. Please welcome Eliza Knight!

Hello! I’m Eliza Knight, an award-winning and USA Today bestselling author of historical romance. Under the name E. Knight, I pen rip-your-heart-out historical fiction. Most of my novels take place in medieval Scotland, which is my favorite time period to write about. I’m fortunate enough to have been able to do some research in Scotland, too, which brings me even closer to my characters and the land they cherish so much.

My Stolen Bride series is kicked off with The Highlander’s Reward, and in it my hero Magnus Sutherland fights for William Wallace and the Bruce in trying win back Scottish freedom from the English. So what happens, when in the middle of a battle, Magnus comes across an English lass, daughter to the enemy, in need of saving? Well, he takes her of course, and forces her to marry him. Arbella is horrified. She didn’t like the idea of leaving England to marry an English lord occupying a Scottish castle as it was. It’s a wild place full of heathens, and now she’s married to a barbarian! For Magnus, marrying the enemy puts his duty to his clan and country in jeopardy, not to mention that having a wife will be a total pain in the arse. But what started as a mock marriage turns into one of passionate love, and together they have to fight off the enemies who would seek to destroy them. The Highlander’s Reward is currently a free read—escape to the Highlands with me and give this series a try!

My story in The Nutcracker Reimagined is The Highlander’s Gift, and it features the daughter of Magnus and Arbella from The Highlander’s Reward. Bella is a fiery and independent lass who definitely doesn’t want to be constrained by the bonds of marriage. And she just so happens to find the most perfect man for her. Sir Niall Oliphant was betrothed to the Bruce’s daughter, Princess Elizabeth, until she declares that his wound in battle has incapacitated him as a man. Because he does not wish to marry the spoiled royal, he is glad to pass her off to his brother Sir Walter, and remain a bachelor. Until he is presented with an offer from the Earl of Sutherland to marry his only daughter, a lass more beautiful than any other. Bella Sutherland, daughter of one of the most powerful earls and Highland chieftains in Scotland, can marry anyone she wants—but she wants no one. When she spies the injured warrior at the Yule festival who has been shunned by the Bruce’s own daughter, she makes her choice. What is better than no husband? A husband who cannot truly be husband at all. With them both satisfied that they are gaining a marriage in name only, imagine their surprise when love blossoms and passion ignites? 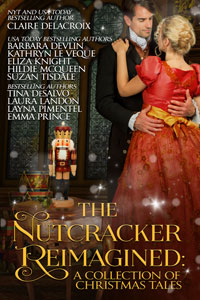 The Highlander’s Gift is the ninth medieval tale in my Stolen Bride series. It will be available first as a novella in the Nutcracker Reimagined which releases on October 19th — only available for 30 days for 99 cents – along with nine other great Christmas novellas! After that, The Highlander’s Gift will be expanded into a full-length novel and released in its own edition.

Visit me at www.elizaknight.com and sign up for my newsletter to be the first to know about new sizzling hot reads, book news, contests, and more!

Pre-order your copy of the Nutcracker Reimagined today at these portals: