The new digital editions of the Bride Quest II books are now available! This latest update includes The Temptress and the Bride Quest II Boxed Set. The Countess and The Beauty were already updated. I’ve added them all to my online store, too.

If you bought these books previously, you should be able to download the new editions (with the new covers) as free updates. Amazon is the one portal where this might not be offered automatically, but you can contact their customer service to get your update.

Esmeraude of Ceinn-beithe knows that she alone can name the winner of her heart. To the knights gallant who ride from afar to do her bidding, she issues a challenge: a riddle that is both quest and test. And then she flees, daring her suitor to follow. Thus begins the Bride Quest of Bayard of Villonne, to compete for the hand of a woman he has never seen…

Newly returned from the Crusades, Bayard has warned his family of a pending attack upon their estate. When they pay no heed to his message, he swears to protect the family holding himself…even if its price is a marriage of convenience. It seems a simple matter to win the hand of a rural maid in a barbarian contest — until the chase begins. Esmeraude’s challenge makes her far more intriguing than Bayard had dared to hope.

But when he follows her across the waters and rescues a tattered, ravishing damsel in disguise, he knows he has found her. Recklessly, she offers herself to the handsome stranger. But not even a passion that touches both their souls can win her hand. For Esmeraude will settle for nothing less than total surrender of the crusader’s worn and weary heart…a treasure Bayard is determined to keep shielded forever.

Three fairy tale medieval Scottish romances in one digital bundle, from the “Queen of Medieval Romance”!

In The Countess, Eglantine flees to a remote Scottish holding, in order to give her daughters the chance to marry for love, only to find an alluring highlander insisting Kinbeath is his possession. Duncan suggests a handfast, intending to win the heart of the alluring noblewoman during that year and a day, but Eglantine is determined to resist him, at all costs. 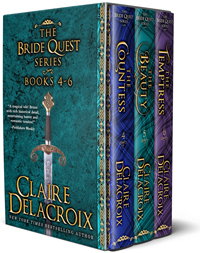 In The Beauty, Jacqueline chooses to join a convent instead of marry, only to be abducted by a scarred crusader intent upon avenging himself upon Duncan. Little does Angus realize that he has seized the wrong maiden, much less that she will help him to reclaim his stolen estate and claim his wounded heart as well.

In The Temptress, Esmeraude challenges those knights seeking her hand to a bride quest, intending to wed only the most worthy of the contenders. Bayard’s ambitions are bound to his success, and he is not a knight whose heart is available to be claimed – but Esmeraude will accept no less than his all.

This digital boxed set includes all three medieval romances in the Bride Quest II trilogy: The Countess, The Beauty and The Temptress.