BookBub is currently running a promotion featuring bestselling romance reads at 99 cents at iBooks through the 22nd. They’ve included my Scottish time travel romance and romantic comedy, The Last Highlander, in this promotion, which is sweet. 🙂

Follow the iBooks link to the iBookstore to get your copy of The Last Highlander and also to see what else is on sale.

I’ve also made Morgan and Alasdair’s story 99 cents at Amazon and B&N, as well as in my online store. If you haven’t yet picked up a copy, here’s a good chance to do so! 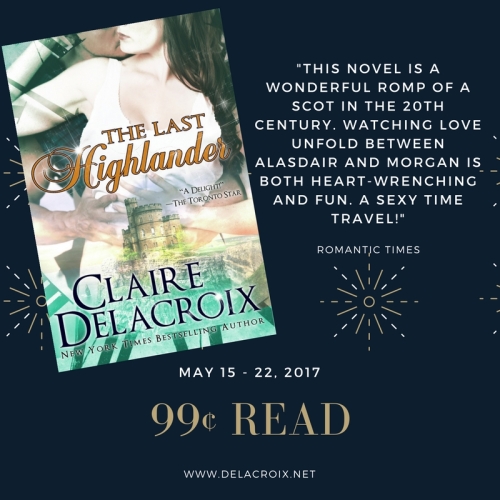 Scotland, 1314: After the Scots reclaim Edinburgh Castle, Alasdair MacAuley only wants to celebrate. But the revels are interrupted by an old crone who claims the castle’s true owner is the legendary witch Morgaine le Fee. Dared by his fellow warriors to go meet the witch, Alasdair heads down a flight of stairs — and tumbles right into another century…

Scotland, 1998: American Morgan Lafayette is in Scotland to enjoy the history, not to ogle men in kilts. So when she stumbles upon a brawny man in a kilt, she is less than enthralled. She is certain he’s drunk for he claims Morgan is a powerful sorceress who has brought him to her magical kingdom! Despite her reluctance, she is intensely drawn to this handsome Highlander and the mystery surrounding him, a mystery that has the power to alter history — and her heart — forever…

“A delight… the taste… will linger on your tongue!”
The Toronto Star

Reader letter from the new edition.