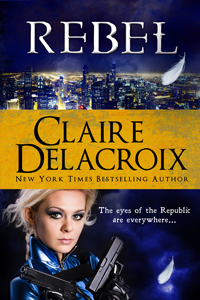 The Prometheus Project trilogy of urban fantasy romances was a departure for me in many ways, a visit to a very gritty dystopian world of the future, where angels voluntarily shed their wings in a quest to aid humanity. This world is filled with secrets and concealed truths, so it shouldn’t be a surprise that each book gave me new questions to answer. We started outside an “old city” in Fallen, an off-limit zone that Lilia Desjardins was bold enough to explore. We learned not only about the angels shedding their wings in that book, but about the survivors hidden in the old cities like Gotham. In Guardian, we went on a quest with Rafe to find and protect a woman who had long been hidden in the netherzones, and encountered the wraiths, a group of people lost to the Republic’s databanks. In Rebel, we undertake a bold mission with Armand at the Institute for Radiation Studies itself, in which he finds himself opposed by a wraith assassin. Theodora is an alluring woman who insists she will do anything for the bounty—but Armand quickly doubts that she’s as mercenary as she would have him believe. Together they enter the secret realms of the Institute to find Armand’s captured comrade, with only each other to trust as they try to evade capture themselves. I like their journey of discovery and the way this pair provoke each other to reconsider their assumptions.

I felt for years that I’d done badly by Tupperman in not giving him a happily-ever-after, and there were certainly readers who agreed with me. His story finally came to me (maybe it was in a flash of angelfire!) and I’m happy that it will be published this year. Originally, I’d expected Tupperman’s story to be a novella, but he had more to say than that, so it is a full book, the fourth novel in the Prometheus Project. Abyss is set several years after the ending of Rebel, when the elite corps of fallen angels known as the Watchful Host are being stalked and assassinated. Tupperman embarks on a quest to save the souls of the angels he convinced to shed their wings, never anticipating that he’ll meet a woman who challenges all his preconceptions. There’s an excerpt from Abyss at the end of this book, just to tempt you.

The research for these books was fascinating, as it touched so many topics. I often find myself reading old stories and myths, as well as variations in familiar stories, when researching my books: angelology was completely consistent with that. I’m also used to researching different physical locations for my books, including the underground realms and the history of cities. But with the Prometheus Project, I had to learn a lot about radiation and nuclear bombs. Both proved to be fascinating subjects, and not nearly as simple as one might expect: the elusiveness of data was part of what inspired the existence of the wraiths in my fictional world. If you’re interested in learning more about nuclear research and radiation, I recommend these two very readable volumes: Before The Fall-Out: From Marie Curie to Hiroshima by Diana Preston (Doubleday, 2005) and The Plutonium Files by Eileen Welsome (Random House, 1999). They are both proof that truth is stranger than fiction.