One of the (many) things I’ve been working on this summer is compiling all the various details about my fictional worlds into comprehensive guides. This includes lists of characters and details about those characters, family trees and family relationships, relevant dates and events for those characters, as well as known information about the world itself and a glossary of terms. 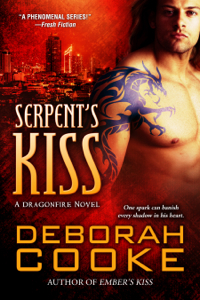 The first of these that I began to compile was for Dragonfire. In addition to the above, that world guide includes the lore of the Pyr and their history, as well as an explanation of their powers. Since I began compiling the world guide when I was writing Firestorm Forever, it’s proving to be a bit of a slog. There’s a lot of back-and-forthing in the books and my notes to be done, and so I have an assistant helping me on this project. It still won’t be done for a while. Because many readers have asked about it, there will be a published Dragonfire companion volume, which will be released as part of the publication schedule of the new editions of the first eight books.  My assistant is also writing synopses of all of the stories and I’m adding some additional notes about the creation of Dragonfire. It’s going to be a big fat book and I’m excited about it. 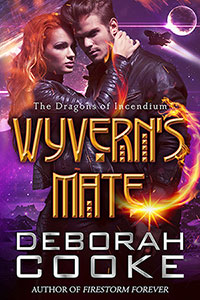 In contrast, the world guide for the Dragons of Incendium is evolving as the stories are written. My idea here was that I’d be more organized and avoid all this digging through the past by working in real-time. This world guide is on the Dragons of Incendium website under the tab “Guides” and it’s updated after the publication of every new book in the series. You’ll find a cast of characters and a glossary there, as well as some additional references like a Brief History of Incendium. The inclusion of these references is one of the reasons that these dragons have their own website.

On the historical side, I haven’t been nearly as organized. I have family trees compiled and available for free download in my online store—and I update those as various members of each family marry. There’s also a cast of characters for Kinfairlie that was compiled around the time I wrote The Renegade’s Heart, but beyond that, we’re talking file folders and piles of notes. I’m realizing how inefficient this is as I retrace everything I’ve said about Ross. 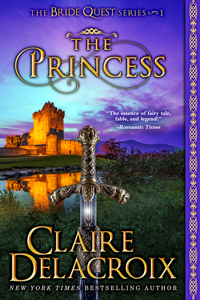 In preparing the new editions of the Bride Quest books, I had a question and unearthed my old notes—I found a map of Tullymullagh that I’d drawn! That got me to thinking about connecting my historical worlds and I wrote a blog post about that in June. The thing is that to make the worlds intersect plausibly, I need to compile world guides for my own reference.

Which explains where I am right now. I have a Dragonfire companion volume in the works. I have a Dragons of Incendium world guide on the website. I am currently creating a Bride Quest world guide and a Ravensmuir/Kinfairlie/Inverfyre world guide for my own reference. And that brings me to the question of the day—what should I do with all these world guides when they’re done?

There’s a poll below about world guides and companion volumes. I’d love if you took a moment to share your thoughts. I’ll leave it open for quite a while, since these references will take some time yet to be completed.

Don’t worry – The Dragonfire companion volume will definitely be published. The cover is done! It’s the others that I’m wondering about.

Here’s a poll about which series of mine for which you’d like to have a world guide:

And finally, here’s a poll about what you expect to find inside a world guide, just to make sure I don’t miss anything! There’s room for you to add suggestions.

There’s something about the end of the calendar year that makes me want to review and revise every detail in the hope of making the end result better. One of the things I’ve been thinking about is my monthly newsletter. I’ve been trying some new ideas and have some more in the works, but today, I’m asking you for some feedback.

What do you like to read in author newsletters?

Or, maybe more accurately, what compels you to open author newsletters? 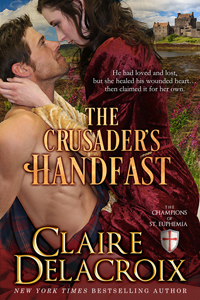 In my newsletter right now, you’ll find new releases, with their description, cover and buy links. You’ll find upcoming releases, either in cover reveals or when there’s a pre-order available. I’ve noticed that you like free downloadable samples from my online store, so I’ll be doing those for every book in future. I give you a heads-up on book sales and promotions, as well as giveaways and contests. I also offer discounts in my newsletter for my online store on print and digital books. I’ve added a monthly print book giveaway here on the blog, and that will be in the newsletter each month. (This month’s giveaway is a signed copy of The Crusader’s Handfast. Here’s the post where you can comment to enter.) You have the option as a newsletter subscriber to choose to receive all my news, news on my paranormal romances, news on my contemporary romances or news on my medieval romances. (If you haven’t done this, you can change your preferences.)

If you haven’t subscribed to Knights, Dragons and Heroes, you can do that right here.

What else would you like to see? I’ve created a poll today to gather up your answers and plot my course. These polls only allow you to choose one answer, so please pick the most compelling one. If you have another suggestion – or if there’s another serious contender – please add it in the comments. The whole point of the newsletter is that it should be interesting to readers, so I’d really appreciate your input.

Thank you in advance!

As promised, here are the results from the short survey I set up this week. There were four questions, and I had over 300 replies. You didn’t all answer every question, but that’s okay – and some of you were good enough to leave comments on the last one.

Here are the results.

The first question was about which next series featuring the Pyr should be published next. As you can see, the results were pretty overwhelming in favor of the contemporary trilogy: 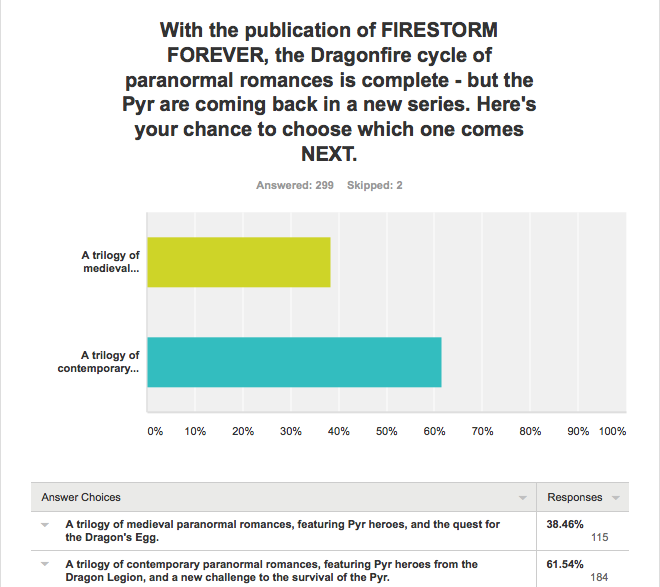 The second question was about the order of publication, whether one series should be published in its entirety, then the second series, or whether I should alternate books from each series. Again, we have a definite skew: 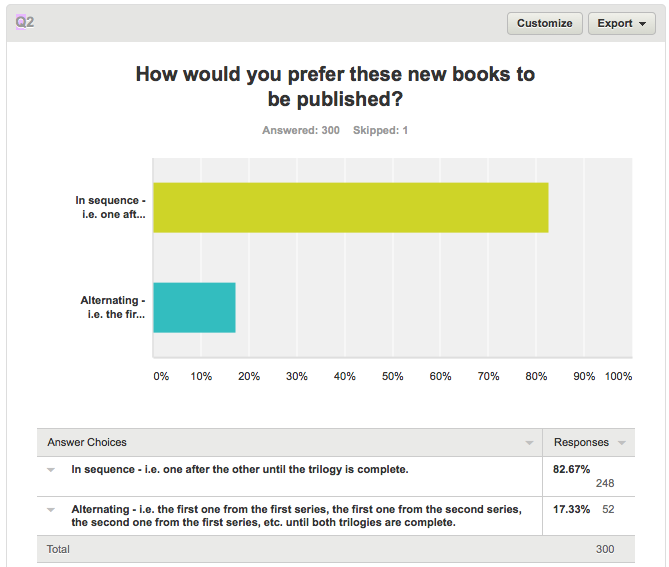 Thirdly, I asked about frequency of publication. You surprised me on this one: I expected the results to be overwhelmingly in favor of my publishing more books faster. Instead, results are more spread out, although more frequent publication is still the favored choice: 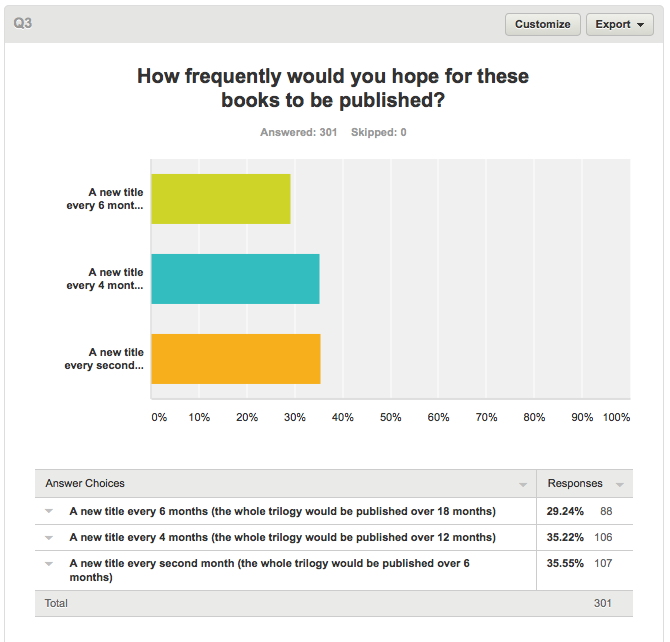 Finally, I asked about your buying habits, mostly because I’m curious how you shop. Some online portals insist that making books available for pre-order is key to success, while others are less encouraging. Pre-orders can be a bit more trouble to manage, so I wondered whether they were worth the effort. For 28% of you, they are, which is great to know. 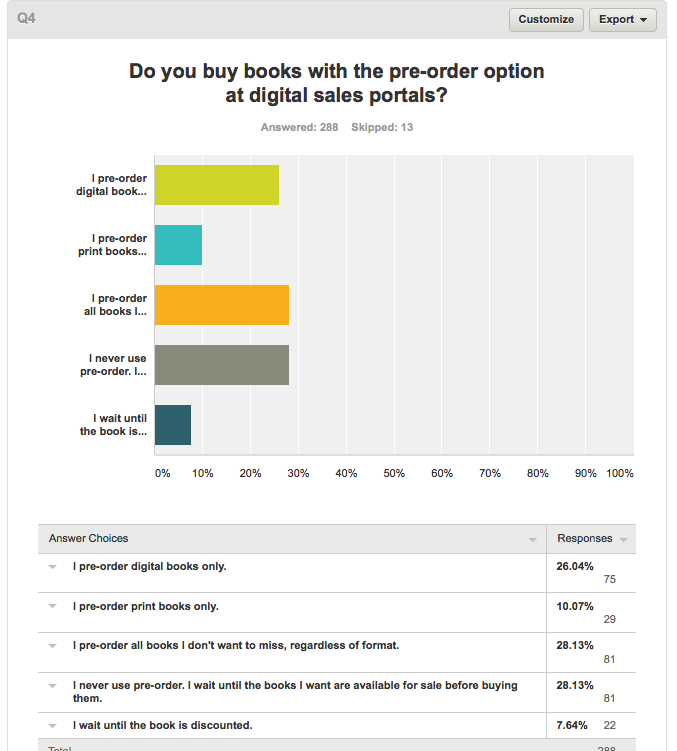 I’m not sharing the comments that many of you were gracious enough to share, although I really appreciate your taking the time to provide them. I didn’t want anyone to feel outed by making comments, but I’ve saved them all and am listening.

Thank you all so much for participating in the survey. The contemporary paranormal romance trilogy featuring my dragon shifters will be next! (And even more of you are going to think that way after you read Firestorm Forever, and get to know those Pyr in question a little bit better.)