We’ve been having so much rain here that Mr. Math and I have been discussing the merit of building an ark. It’s a bit frustrating as far as the garden goes – the weeds keep growing, but the weather isn’t very conducive to getting out there and cleaning up the beds. I did a lot of work in April but have been kind of stalled since then, and the thistles are taking advantage of their moment.

Rain is good weather for writing, though, and it’s also good for knitting. I’ve been working away on my Wingspan shawl and am getting down to the feather tips. It’s all bunched up on the needles though so I can’t take a good picture. I’ve added some beads, which I really like, and currently am playing yarn chicken. Will I run out? (I think it likely.) What yarn will I use for the wingtips if I do run out of this yarn? That’s a really interesting question and I haven’t decided yet. I’ll take some pix when it’s finished and blocked.

In the meantime, I’ve knit myself a pair of socks. Wingspan isn’t TV knitting at all. Socks are. These socks are very bright, which is welcome this year. 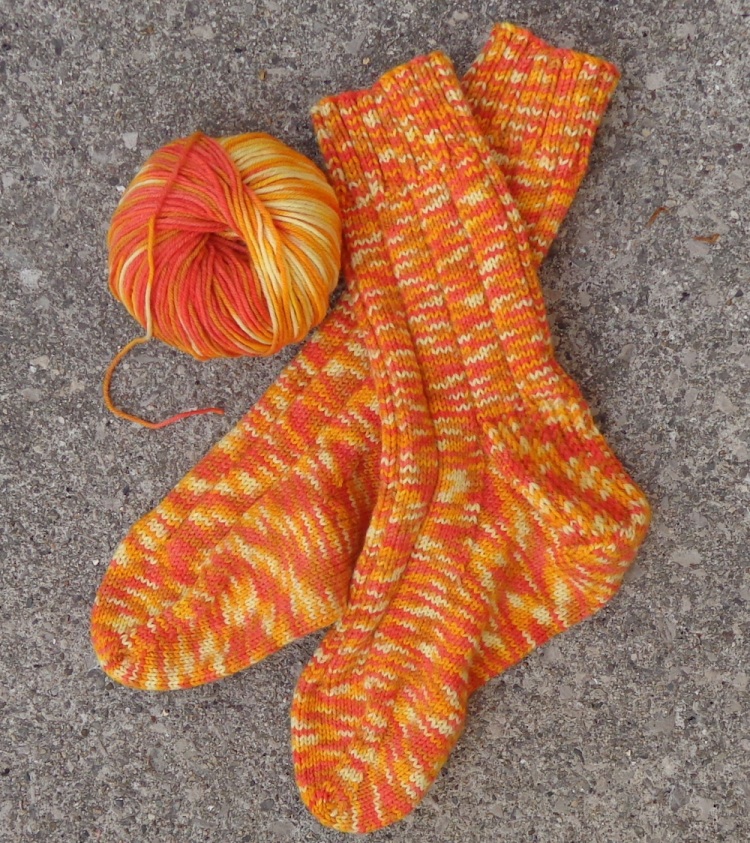 The pattern is my usual one, but the yarn is a new for me. It’s Sugar Bush Itty-Bitty, which I found in the mill ends bin at Spinrite. The colourway is Sailor’s Sky Delight. The yarn is a blend of merino and nylon with a bit of cashmere. It’s a lot thicker than I thought it was, and these socks are both thick and big. I should have used 64 sts instead of my usual 72. I used just over two balls. 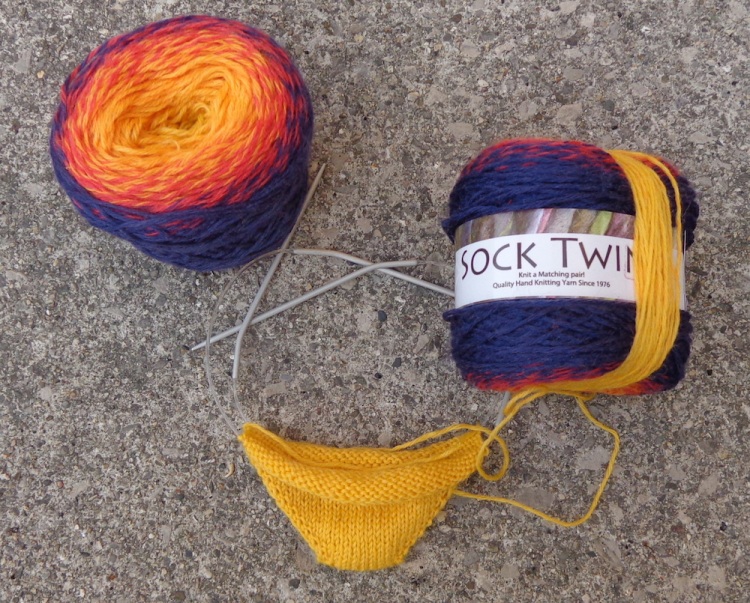 I’ve cast on another pair of sunny socks for myself. I bought this yarn at Spinrite, too. It’s called Sock Twins and includes two balls of yarn that are gradient dyed. The idea is that you easily knit socks that match. I want to use it all so I’m knitting this pair toe-up, starting with the yellow. I like the colours but am not loving the yarn so much – it feels thin and splitty – but maybe it will full when it’s washed. They’re not showing all the colours on the website – you can see mine, which is called Sunset, on Ravelry right here.

I also found the loveliest magazine this week. It’s called By Hand Serial, and the issue I found is number nine. It features a region and the makers in that region, with lovely photographs, interview and projects. Number nine is about Nova Scotia. You can see a preview on their website, right here. As a bonus, I’m not really motivated to finish my Wingspan, because I need those 3.5mm needles to make the Lunenberg Cardigan! 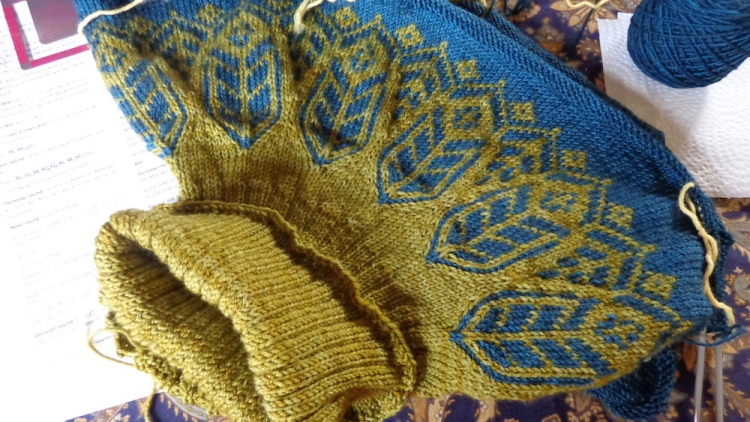 I’ve been working on a pullover with a beautiful yoke. The pattern is called Wild Grass and the yarn I’m using is Swans Island Washable Wool Collection Sport. For this pattern, you make a provisional cast-on, knit a few rows, then knit up, through the yoke and the neck. Then you pick up stitches from the provisional cast-on and knit down, dividing for the sleeves then to the hems. This means that the fun part is over early. 🙂

I may re-knit the neck on larger needles. Right now, it’s more of a turtle-neck, but the pattern shows it as a cowl, which is a big part of what I liked about the design.

I bought this yarn at Swans Island when we were in Maine last summer. They make the most beautiful blankets and dye their own yarn. The colours are amazing. This is a wonderful squishy and soft yarn which is spun from merino. Here’s a link to the yarn on the Swans Island website – I’m getting a security warning because of their certificate, but maybe that will be fixed by the time you click through. Here’s a Ravelry link, too. The colours I’m using are Mallard and Pesto. The Mallard is a little darker than it looks in this picture. The yarn is also incredibly soft, so I’m not worried about having this wool next to my skin.

A few weeks ago, I told you that I’d had a Eureka moment while knitting my Comfort Fade Cardigan and now knew how to fix another sweater. This post is about that other sweater.

The pattern is from Vogue Knitting Winter 2018 and is a cardigan designed by Cathy Payson in Lion Brand Wool-Ease Thick & Quick. Simple Cardigan is #9 in that issue. (That’s a Ravelry link.) I bought the issue when it came out, loved this sweater and bought the specified yarn – but in a tweedy black called Blackstone. (Here are some pix of the colourway on Ravelry.) I knit it up – it’s a quick knit with such thick yarn – tried it on and was disappointed in the fit. It was doing that thing of trying to fall off my shoulders. Hmm. It’s been sitting for almost a year, waiting on me to figure out how to get the fit right.

This January, I took it apart and ripped the fronts and back out to the underarms. When I reknit it, I made it narrower at the shoulders at the back. I also had found that it was bulky under the arms in the original version, so I added some short rows to make more of a sleeve cap.

Here’s the modified version – I photographed it with a long sleeve turtleneck inside it, to show the neckline and also the 3/4 sleeves. Mine are a little closer to bracelet length with that addition to the sleeve cap. 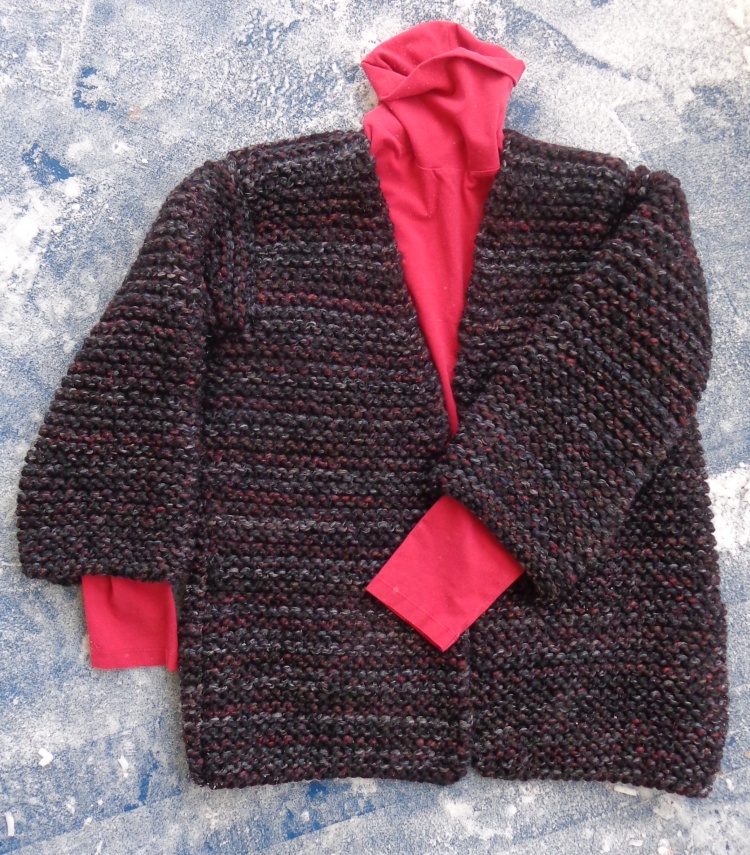 It fits so much better! And it’s so thick and warm that it’s perfect for these chilly winter days.

I love the mix of colours in the wool. Here’s a close up to show you that: 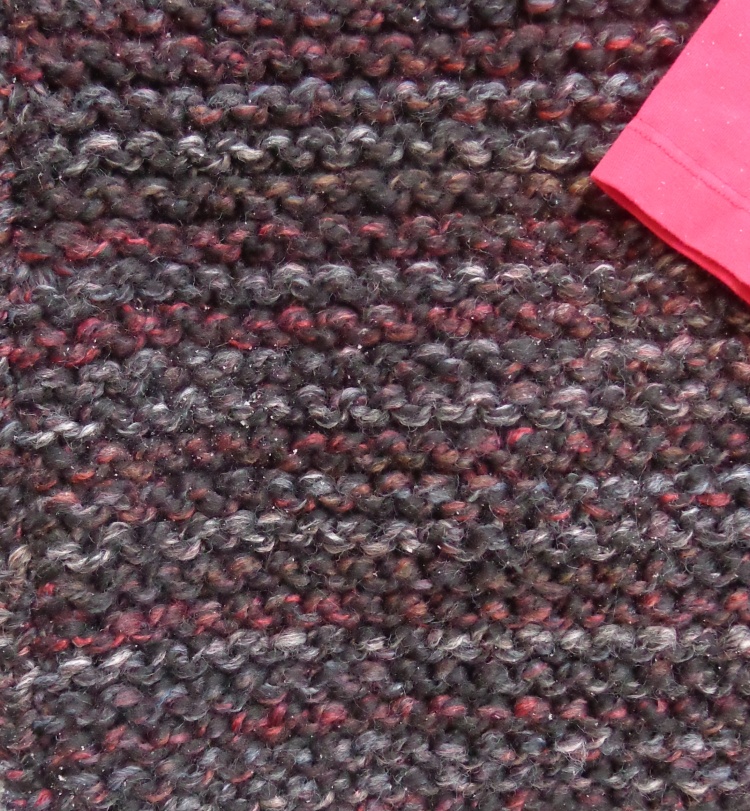 Plus I finished another hat, just in time for the polar vortex. This is the same pattern (First Snow) that I used for my cupcake hats before Christmas. This time, though, I used a ball of tweedy wool that I found in the mill ends at Spinrite and added a purchased fake fur pompom. 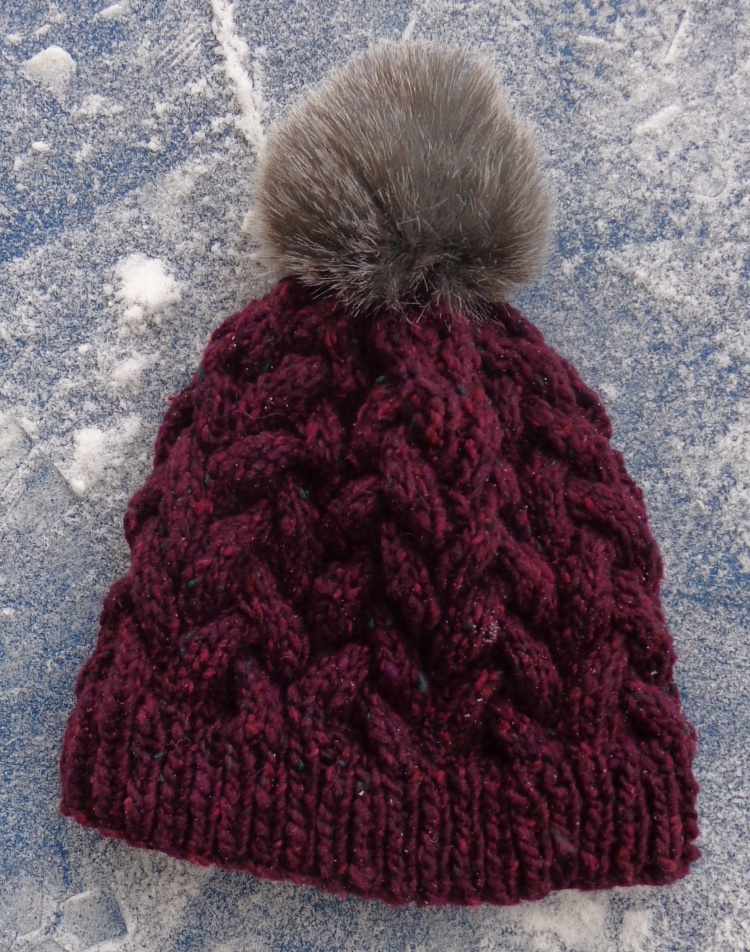 These deep purple has a lot of great flicks of colour in it, in blue and red, which aren’t showing up very well. It’s pretty and I think I’ll keep this one. I have a second pompom and several more skeins of this mystery yarn in different colours, so I’ll make at least one more.

First, I wanted to show you those fair isle mitts in LopiLett, now that they’re finished. Here’s the previous picture of them: 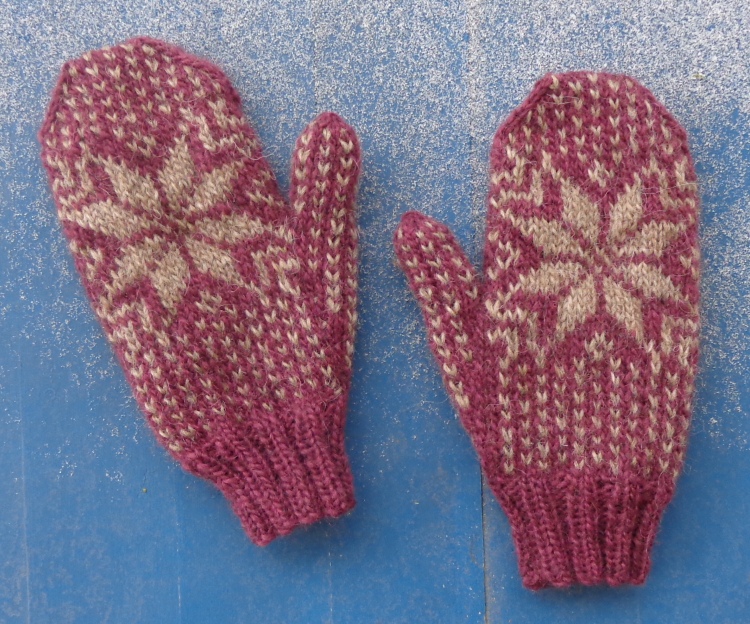 I knit the linings in the same yarn. The neat trick is that since the linings are knitted to the cuffs – you actually pick up the stitches at the top of the cuff and knit the lining from there – the wrong sides of both mitt and lining end up together. That means there are no ends or floats to catch your fingers inside. It also means the mittens are double-thickness and toasty-warm.

Here’s one turned so you can see the lining: 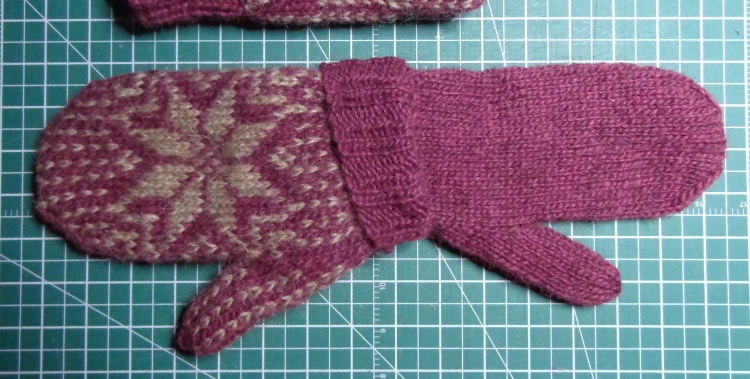 I started a second pair in teal and have the first one done. I think I’ll line this pair with the taupe as I have more of that color left. 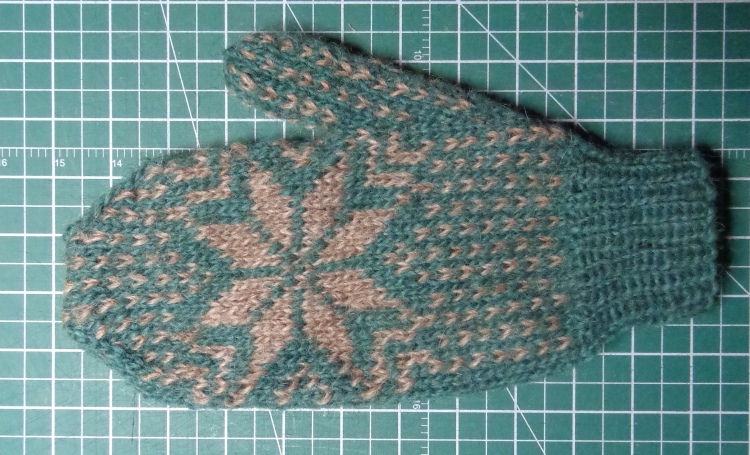 I’ve also been knitting mitts for charity, although I have fewer completed this year because of the hats and these fair isle mitts. All year, I add odd balls and ends to a bag, stashing wool that I think will make good mittens. Every November, I dig out that bag (and sometimes add to it) then start knitting mittens for the food bank. I usually use an old Patons pattern for worsted yarn – it’s a single sheet that wool shops used to give out free. Mine looks about as worn as that one on Ravelry, but has scribbled notes on it, too. This year, though, I had some chunky yarn, some odd balls of Patons Alpaca Blend that I found in the sale bin at Spinrite. I found this wonderful pattern from Tin Can Knits called The World’s Simplest Mittens. It includes instructions for four weights of yarn, and five sizes of mittens, and it’s free!

Here are my first three pair, in that Patons Alpaca Blend. The two pair on the left are a children’s size and the one on the right is the medium adult size. Aren’t they cute? 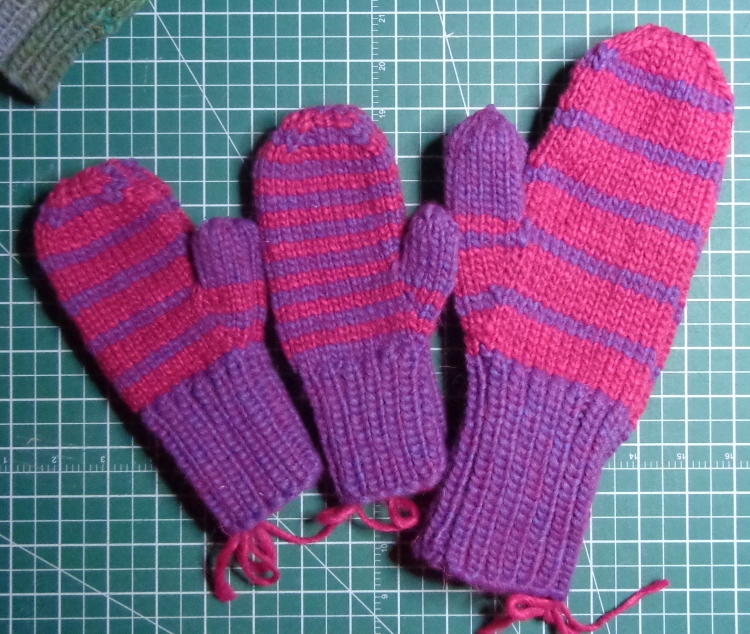 I also am knitting some in ends of Rowan Colourscape Chunky. Since this is a self-striping yarn, I’ll knit as many as I can from the ends, then figure out which look the best together as pairs: 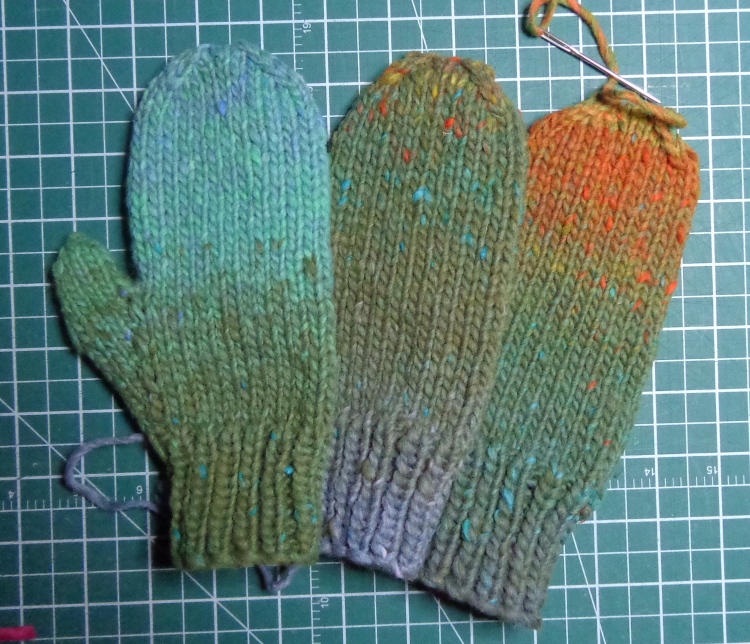 I really like Colourscape Chunky and am sad it was discontinued. I love the colours and the way the variegation shifts so gradually. I also like that there are tweedy flicks of other colours throughout. Kaffe Fassett designed the colourways and it shows. These green ends are from this vest that I knit for Mr. Math. I have some more bits – left over from this vest for me (which isn’t as nearly as neon pink as it looks in these pix) and also this cardigan for me – plus one more sweater-lot for a cardigan for Mr. Math. I might cast that on in January.

What have you been knitting lately?

This week, I knit some stars. 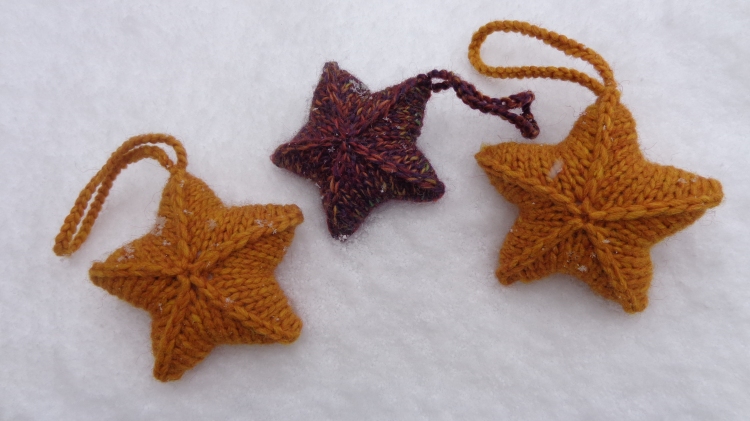 The pattern is called Twinkle Star and it’s a free Ravelry download.

I knit mine with some yarn in my stash. The gold is Patons Alpaca Blend and the purple is Louet Bonnie. I changed the needle size to get a nice tight fabric with each yarn. They’re stuffed with polyester fiberfill and I think they’re just cute.