Kauni Effektgarn is a self-striping yarn with long gradations of color which I like a lot. It feels kind of rough when you knit it but you wash it after knitting, and hey presto, it fulls and becomes amazingly soft. Plus the colours rock.

Years ago, I knit a sweater out of this yarn for Mr. Math that I called the Elrond Sweater. (That link will take you to my blog post about it.) I used the colorway that is all blues for the background and the rainbow colorway for the second color. I had to break the blue section out of the rainbow because it disappeared against the background. I also broke out the lime to knit the I-cord all around the edges. (It still irks me that the zipper is slightly offset.) Mr. Math wears this all the time.

Later I used up the bits in two pairs of Hippocamus mittens. That’s the Ravelry link to the pattern. They don’t quite match, but they’re close enough.

Ever since I finished the sweater for the mister, I’ve wanted to make one for myself. I started one before, but stalled after knitting the back (because it’s a kimono style and hmm.)

This year I started another cardigan.

The pattern is The Oa by Kate Davies, which is written for a much thicker yarn. It’s also a pullover with raglan sleeves, but I want a cardigan with regular sleeves. So, the pattern is more of an inspiration than a set of instructions.

I’m using solid black as the contrast to the rainbow colorway. (I’m not sure Kauni was making the solid colors when I knit Mr. Math’s sweater.)

Here’s the back of my sweater: 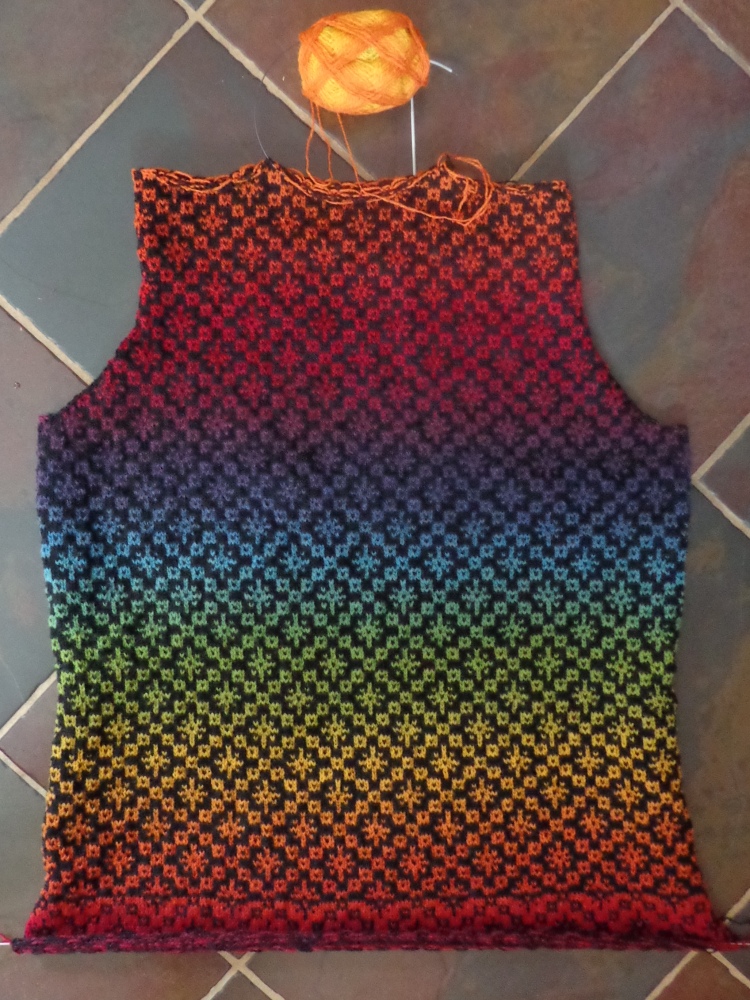 It’s huge because I’ll toss the finished sweater into the washing machine when it’s done. This will full and soften the yarn and will also shrink the sweater. (I’m really hoping I made my calculations correctly!)

Here’s a detail shot of the hem. My idea is that there’s a border with the colorways reversed, along the hem and up the front on either side of the opening. 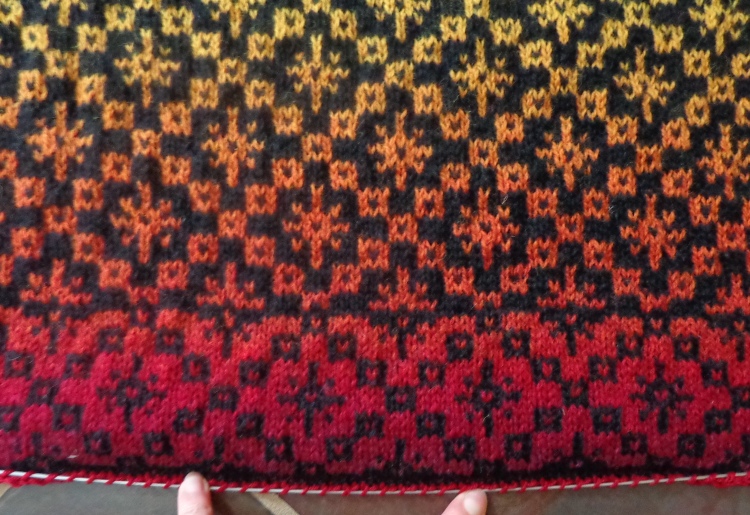 Now, I’ve started the front. I’m knitting the two fronts in one piece to keep the rate of the color changes roughly the same as the back. I’ll steek the fronts when they’re done. (It’s possible that I didn’t continue with the Kauni Roan because there was steeking to be done. I’ve never done a steek. This sweater will probably be the first steek for me.) The rate of the color change will be slightly different because 1/ there are 7 stitches more on each row, because there are 7 stitches between the two fronts for the steek and 2/ the inverted bands of color running up each side of the center front will mean that the rainbow is used at a quicker rate than on the back. I’m curious to see how much different the color comes out. This is still the best way I can think of to have them as close as possible to being the same.

The only way to make the fronts and the back exactly the same is to knit the sweater in the round, as I did with Mr. Math’s sweater. I wanted the blocks of each color to be wider on this one though, so compromises must be made. 🙂

I can’t even think about the sleeves. I knit Mr. Math’s top-down to make sure they matched. I’ll cross that proverbial bridge when I get to it. 🙂

I haven’t shown you any knitting lately because I haven’t finished many projects. I have a number of bigger ones on my needles and they just go on and on.

BUT, I did finish this hat. It’s very fuzzy and soft. The best way to block a beret is on a dinner plate, which is where it is here:

The pattern is Selbu Modern, which is a free download. I’ve knit this pattern before, but I gave the hat away without taking a picture. It’s an easy pattern to follow. I used stash yarn for it – Misti Alpaca Sport in dark purple (this yarn is discontinued) and Rowan Mohair Haze in bright pink.

The combination is fun and bright for those winter days. I realized as I was knitting that I’ve worked in this colour combination before – I made a pair of gloves in two shades of Kidsilk Haze (more fuzzy mohair!) but seldom wear them because they don’t go with anything else. That’s solved now! Here they are:

What have you been knitting lately?