I have a sale this week at KOBO on two complete series of my paranormal romances.

First, from November 11 through November 17, you can save 40% on the entire series of Dragonfire Novels.

Kiss of Fire, the series starter is free right now. The sale includes Kiss of Fury, Kiss of Fate, Winter Kiss, Harmonia’s Kiss, Whisper Kiss, Darkfire Kiss, Flashfire, Ember’s Kiss, Kiss of Danger, Kiss of Darkness, Kiss of Destiny, Serpent’s Kiss and Firestorm Forever. Phew! That’s a lot of dragon shifter romance! This is a great chance to fill the gaps in your collection and binge-read the series in time to start DragonFate!

You can also save 40% on my Prometheus Project, which features fallen angel heroes in a apocalyptic future. Fallen, Guardian, Rebel and Abyss are all included in this sale, so you can read the complete series.

The discount is applied with the code COOKE40 that you use at check-out.

Here’s the landing page at KOBO.

I received my print copies of Under the Mistletoe! Aren’t they pretty?

I had to laugh when I added a copy to my bookshelf. My plan with Secret Heart Ink was to write some shorter stories set in the Flatiron Five world, which could be published more quickly. Um. That didn’t work out so well. You can see how the stories kept getting longer by the widths of the spines. 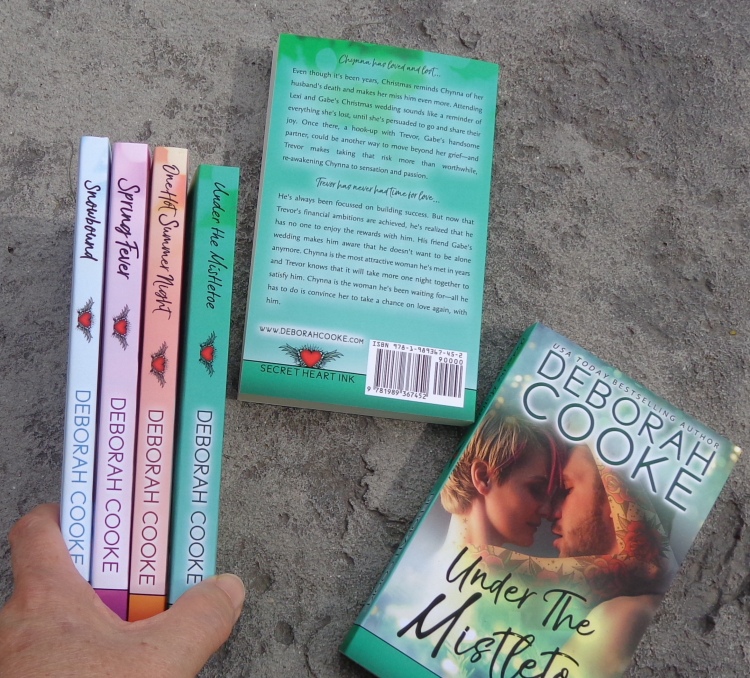 Looks like I need to face the fact that I write longer books. 🙂

There are new Dragonfire Boxed Sets coming this year! Each one will contain three full-length books (or equivalent) and will be priced at $9.99 US (or equivalent). Like all of my boxed sets, when you buy two books, you get one free.

First up is Dragonfire Quest. 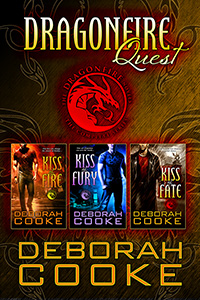 Dragonfire Quest is the first digital bundle in The Dragonfire Novels: The Complete Series and includes the three books that launch the Dragon’s Tail Wars between the Pyr, dragon shifters pledged to defend the treasures of the earth, and the evil Slayers, dragon shifters bent on destroying both the Pyr and the humans they protect.

Included in this bundle are Kiss of Fire, Kiss of Fury and Kiss of Fate.

Today’s the day! The Crusader’s Vow is available now, and the Champions of St. Euphemia series of medieval romances is complete! 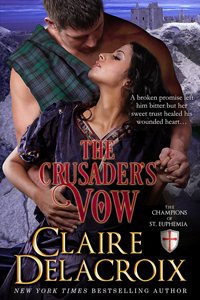 Returning home to Scotland triumphant after his military service, and entrusted with the precious relic of the Templars, Fergus is more than ready to wed his beloved Isobel and begin their life together. To his dismay, Isobel has wed another in his absence, and he believes all of merit is stolen from his life—until Leila resolves to win the valiant highlander’s heart for her own. She is convinced of her own success, until Isobel tempts Fergus anew.

Download a free sample of The Crusader’s Vow from my online store.

Buy The Crusader’s Vow at these portals:

It’s been a while since I’ve written a book that was as much of a fighter as The Crusader’s Vow has proven to be. I went back to the drawing board three times with this book. Each time I looked at it (even when I thought it was done), it needed at least one more scene. I finally sent it off to edits a couple of weeks ago, then spent this weekend adding another 15,000 words to it in the process of doing revisions.

There are good reasons for this, of course, It’s the last book of the Champions of St. Euphemia series (or the last one of the series for me to write, since I wrote book #5 before book #4) which meant lots and LOTS of loose ends to tie in. I had many timelines to incorporate and events mentioned in the other books to keep in order. (My editor may want to kill me after the writing of this series!)

Fergus and Leila’s was also a challenging story to write in itself—how could I make it plausible for a woman raised in Palestine as a Muslim to be happy in Scotland in 1188? Love wasn’t going to be enough for me to believe in Fergus and Leila’s happily-ever-after, which meant I had to dig deeper. Plus they both had to be offered what each believed the other wanted most, and at the worst possible moment. I ended up exploring the notion of ‘home’ and what it meant to both of them—I had to do that to be sure they both got what they desired most in order to be happy forevermore. Phew.

I knew the concluding scene of this story before I even began to write the book, and it was very satisfying to commit it to the page. It’s the perfect resolution, in my opinion, and I hope you enjoy it.

We are doing the last proofreading today and I should have the final file tomorrow or Thursday. Look for the book to be listed at B&N for pre-order by the end of the week. I’ll share the link with you when it’s live. I’ll also be setting up the print edition for publication this week and will share those links with you once they’re live.

The book will be published March 23, bringing this series to its completion.

Remember that you can download a free sample of The Crusader’s Vow from my online store.

Pre-order The Crusader’s Vow at these portals today:

Phew! Time to take a deep breath and catch up. I was AWOL earlier this week, because I was finishing up The Crusader’s Vow.

Fergus and Leila’s book is now on my editor’s desk and expected back on mine next week. In the meantime, I’m making a list of little tweaks and touches that should be added to the book before publication. (I always think of zillions of little things after the book is “finished”.) I like this story very much and am glad to have gotten to the end of the adventure. I’m ready to start something new, but at the same time, am a little bit sad to say goodbye to my Champions. This is the final book to be published in the series and will make the quest complete.

If you subscribe to my newsletter, you already know that I’ve decided against republishing the Rose Series as The Rose Legacy. I’ve unpublished those book pages from my website. Those three books were the first I ever published and though I’d thought I could do a quick editorial pass, the fact is that I wanted to completely rewrite them before republishing them. If I’m going to put that much time and effort into a book, I’d rather it be spent on a brand new story.

So, my next historical romance series will be The Brides of Inverfyre. We’ll head back to Scotland and catch up with all those kids from Kinfairlie. This linked series will follow after The True Love Brides.

If you’re interested in a great long series of linked Scottish historical romances, you might want to join The Rogues of Ravensmuir newsletter and read book #1, The Rogue, free. This newsletter sequence, dedicated to this series, tells you about each book in the series, offers you discounts for buying from my online store, and gives you a peek behind the scenes at each story’s creation. I’m in the process of creating similar ones for The Jewels of Kinfairlie, The True Love Brides and the Champions of Saint Euphemia—at the end of each sequence, you’ll have the option of joining another series newsletter. So, if you start now with The Rogues of Ravensmuir newsletter, you’ll be all caught up with the Kinfairlie crowd by the time The Brides of Inverfyre series launches.

Subscribe to the Rogues of Ravensmuir series newsletter
and read The Rogue for free!

A little more catch-up—tomorrow I’ll choose the winner of the February signed book giveaway and post a new giveaway for March.

The Crusader’s Vow, the final book in the Champions of St. Euphemia medieval adventure, will be published in March 2017. Pre-order your copies of all five books signed trade paperback editions from my online store!

A company of knights chosen to deliver a sealed trunk from the Templar treasury in Jerusalem to safekeeping in Paris. A group of pilgrims seeking the protection of the Templars to return home as the Saracens prepare to besiege the city. A mysterious treasure that someone will even kill to possess…

Pre-order signed copies of all five books in trade paperback – to ship in April 2017 – at a special price in my online store, right here. 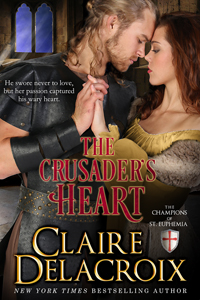 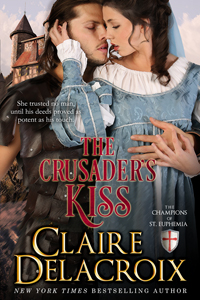 There’s a promotion this week in the iBooks store for 50% off complete romance series, running in Canada, US, UK, Ireland and Australia.

The True Love Brides Boxed Set is part of this promotion.

See all the books on sale.

Last weekend, I participated in the Sexy in the City booksigning in Toronto. Some of you were wishing you could be there, but couldn’t. Some of you really want one of my new tote bags. Some of you were disappointed to miss the show pricing on those trade paperbacks.

The store doesn’t have a shipping calculator, so it charged a set fee per order. With so many books in each special, it’s likely to be short of the actual postage. I charge the actual postage (no handling fee) so may have to request an extra payment from you once your destination is known and your shipping can be calculated. I refund money when the shipping costs less than the automatic amount, but that’s not likely to happen this time.