Theo knows what’s possible…
Because he’s learned the hard way what’s not. The internationally successful supermodel known as Angel stole his heart forever when she was just Lyssa Monroe. There’s never been another woman who could compete—he even loved Lyssa enough to let her walk away when she said it was over. When they meet again, he’s determined to make one glimpse of her sustain him for another decade. When Lyssa offers him one night together, Theo can’t say no—even though he knows a taste will only tempt him to hope for more all over again.

Lyssa has tasted forbidden fruit…
And she can’t forget it, no matter how hard she tries. Theo’s love is a touchstone for all that is pure and good in the chaos her life has become. When she sees him again, everything is simple for once and only one choice is possible. The secret she keeps from Theo could destroy any chance of a future together, but surely she can keep it hidden for just one more night. Or maybe two. How much will she sacrifice to defend her son—and how far will Theo go to convince her give them a second chance?

“So good. I always enjoy returning to Flatiron Five and Theo is the last partner not attached to someone and we find out why in this installment. He is already in love with a woman and has been for the past 11 years. The rest I will leave up to you to find out. Their story was great, shocking, and beautiful. Deborah Cooke handled their second chance romance beautifully. Lyssa has kept quite a few secrets during the past decade since she saw Theo last and she also has some deep scars that Theo doesn’t know about. When they reconnect near New Years, she sets out to right some wrongs and hopefully rekindle a friendship, if nothing else, though she does hope for more. Start to finish the story was enjoyable and engrossing. Passionate and beautiful. Overall, a great read. This series just gets better and better.”

Rendezvous with a Romance

An earlier version of Theo and Lyssa’s story was published under the title Bad Case of Loving You. This version includes changes made for consistency with the new series starter, Just One Fake Date. If you bought Bad Case of Loving You in ebook, you should be able to download Just One Second Chance as an update from the portal where you made your purchase. The update will replace the old book on your reading device. 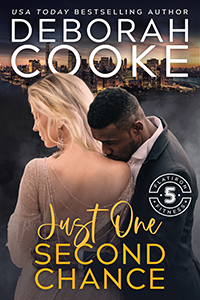 Buy a signed copy of Just One Second Chance in trade paperback from Deborah. The price is in US dollars and includes postage to the US or Canada.

Buy signed copies of the Flatirion Five Fitness series directly from Deborah. Currently, this bundle includes five trade paperbacks and a mass market paperback. The price is in US dollars and includes postage to the US or Canada.

Lyssa and Theo’s story was previously called Bad Case of Loving You and had the cover shown at left. You can still find print editions with that cover at some online portals.