My mitten-knitting has taken an interesting little turn of late: I made a second pair of dragon scale mitts. 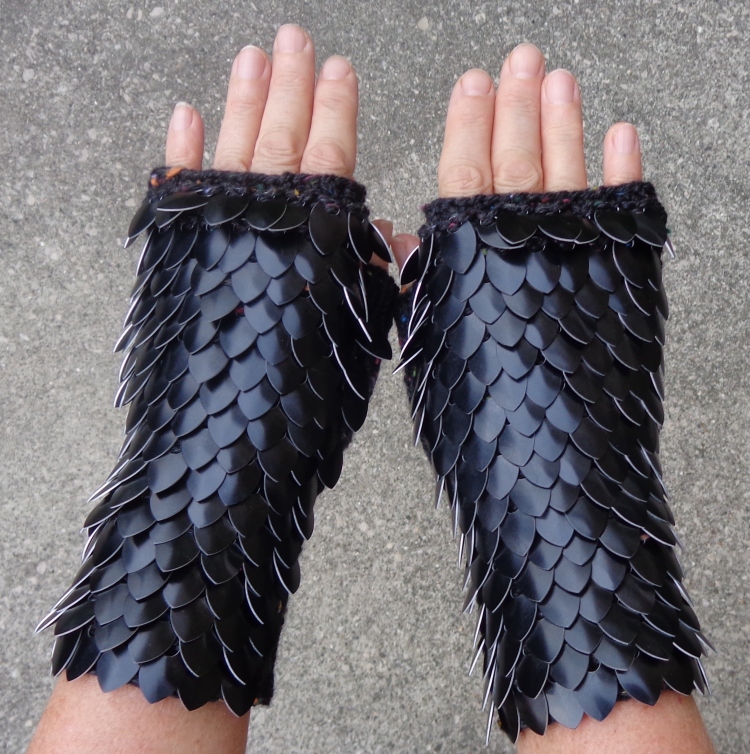 I used a free pattern for ribbed fingerless gloves in worsted weight, then metal dragon scales from Ring Lord. The post about them is right here.

I gave that pair away, but ordered more scales and finally got to them. Here’s the pair I made this week:

Except for the red, they’re the same. The scales are anodized aluminum in the small size, in black and in red. I switched from the black yarn (which is Patons Classic Wool Worsted in Black Tweed) the yarn to Cascade Jewel Hand-dyed, so the knit edge at the fingers would match the scales. For these, I work a row with scales, then two rows plain – the first plain row is black and the second one red, then the rest of the mitt, including the row with the scales, is knit with red. 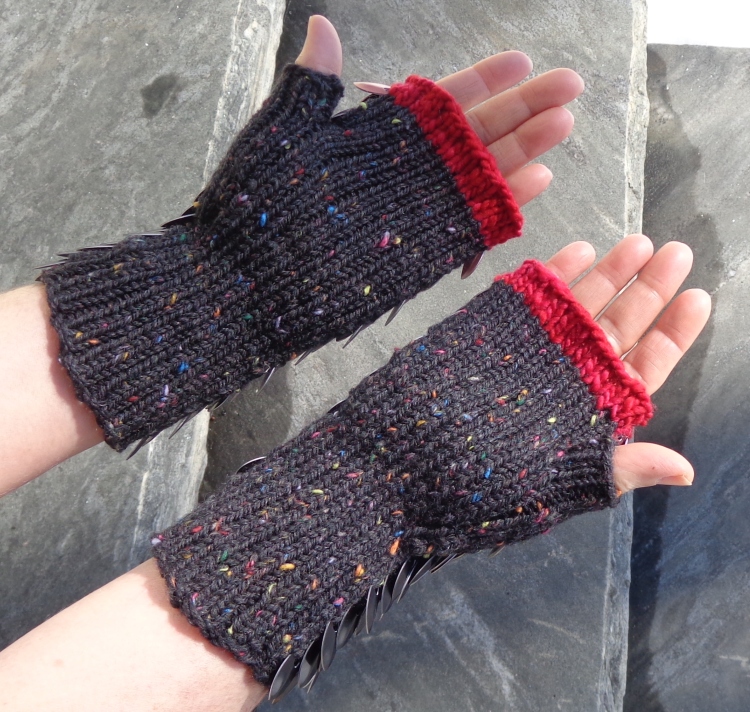 I have Patons Classic Wool Worsted in red, which would have been the same yarn as the black tweed, but it’s more orange red than the scales. It’s called Cardinal, while this one I’d call Ruby. (It’s actually #9969 but that tells you just about nothing. “Ruby” is better!) Patons shows a Bright Red on their site, but I think that’s more of a brick colour. It’s possible that the shade I have is discontinued – it’s been in the stash for a while. The Cascade Jewel is discontinued but it’s a nice single ply yarn with a kettle-dyed look. I found this skein at the thrift store. If you find some, snatch it up – it reminds me of Malabrigo Worsted, though isn’t quite as soft. (I hope this means it won’t pill as readily.)

I also ordered some different scales from Ring Lord, including clear plastic ones and ones that glow in the dark. (They work! Ha! Now I have to find a fun color for the yarn.)

In the course of the big clean-and-organize of my craft stuff, I also found (finally!) a wonderful pattern for elbow-length fingerless gloves. I knit these from a Fleece Artist kit and gave the mitts to my niece. I liked them a lot, though, and remember that it had a lovely fit. I looked high and low for this pattern and found it (of course) in the most unlikely of places – with the remaining yarn from the kit. Gah. It’s called Hans – that’s a Ravelry link.

I cast on a pair to check the fit again, as I think the pattern might be easily modified to have scales. Here’s the first one, without scales.

The yarn is discontinued – it’s Patons Rumour in a colourway that was never distributed. It makes me think of dragonflies.

What have you been knitting this week?