As so often happens this time of year, I’ve been knitting mittens.

This first pair are knit of an Icelandic wool called Lett-Lopi. The pattern is Frost (that’s a Ravelry link). The designer’s company is called Kniterations and I was intrigued to see that she has a Patreon site. I know some authors who use Patreon.

The purple is a bit darker IRL than it appears here.

I did make a couple of changes. The pattern specifies that the star be on both the palm and the back of the hand of each mitt, but I only put it on the back of the hand. It was pretty easy to continue the lice across the other side. (Yes, that allover pattern of stitches is really called lice.) I got into the habit of catching the contrast colour on either side of the thumb gusset, too, as sometimes the floats were longer on the back than I thought ideal. I also changed the shaping at the top of the fingers. 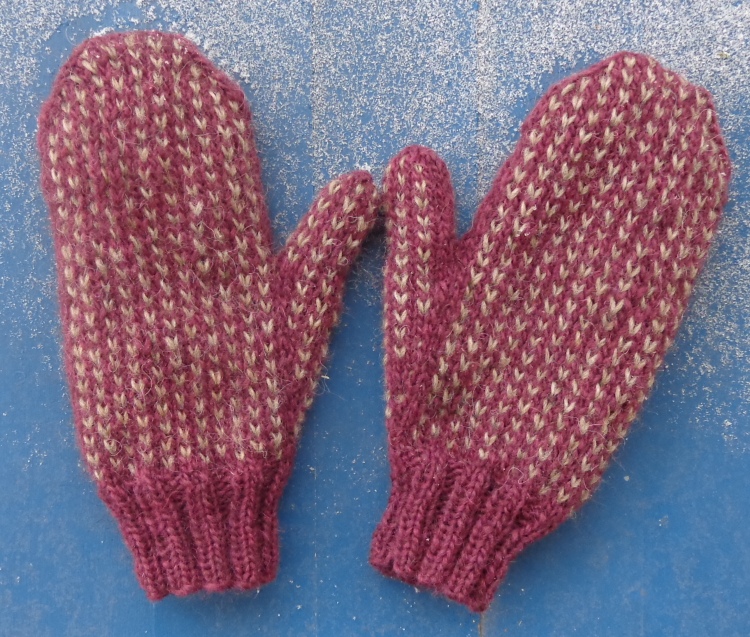 This was a project that I frogged again and again. First, I didn’t read the pattern correctly. I knit the smaller size, which meant starting on row 4 of the chart for the mitt. I didn’t realize that I was working row 1 of the thumb gusset chart and then row 5 of the mitt chart until I reached the star and things didn’t line up. I copied the charts then and pasted the thumb gusset chart beside the mitt chart, lining up the rows beside each other that needed to be knit together.

Second, I didn’t get gauge so had to frog and reknit on smaller needles. This happens when you don’t swatch and I often don’t. Third, I didn’t like the shaping of the tip of the mitt (possibly because I didn’t read the instructions correctly), so I frogged that and redid the shaping in the old familiar way. Fourth, I knit the lining for one mitt in a coordinating yarn, but it was too small and I didn’t think it actually coordinated that well once it was done. I frogged that, too. I had gone down another needle size for the lining, as the pattern instructs, but I’d already dropped a size for the mitten. Now I’m going to knit the lining in the same purple wool on the same size needles as the outside. I think there should be enough yarn since the lining doesn’t have ribbing. (You pick up stitches for it at the top of the cuff.)

The second one went much more quickly than the first. Once they’re lined, I’ll knit another pair in green.