These are knit from a self-striping acrylic yarn called Caron Chunky Cupcakes. It comes in six colourways: each ball has enough yarn to make a hat, and includes a matching pompom.

It was on sale one day when I was at Michaels and (of course), I bought all the colours.

I didn’t knit the pattern on the ball band, but went looking for another one on Ravelry. I found this free pattern called First Snow, which I followed for the first six hats.

Yes, it’s true: I still have more of the yarn to make more hats.

I’ll probably try a different pattern next, although I really like this one. 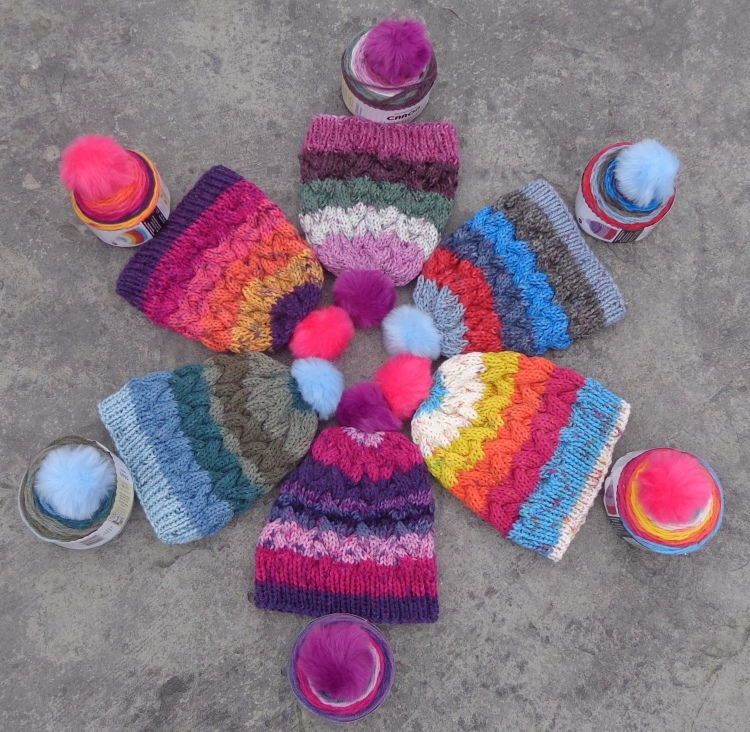 One of the things I liked about this yarn – even though I’m not a fan of acrylic – is that there are dye flicks in each colour band of some of the other colours. That reminds me of hand-painted yarns. It also is a nice squishy yarn.

One irksome thing was that two of the balls had knots in them, and the striping didn’t continue properly after the break. (Can you guess which ones?) I understand that most yarn manufacturers say that one to two knots per skein or ball is acceptable, but finding one never makes me happy. When the yarn is dyed to stripe, a break often creates a challenge. We could suggest they discount balls with knots, but these were discounted and I was still annoyed to find the knots.

What do you think of them?