With all the busyness of the holiday season and #XmasAudio this past month, I haven’t written any posts about knitting. Another contributing factor is that I haven’t finished anything – I’ve done that scattershot thing again of starting too many projects at once. That always happens when I’m working hard to finish a book. This time, it was The Crusader’s Kiss.

I still thought I’d show you some in-progress shots.

First up, I started a pair of fair isle mittens. The pattern is called The Gates of Moria, and it’s from the image Tolkien drew of those gates. If you remember that bit in The Lord of the Rings, the etching on these dwarf-made doors was visible only when they were touched by moonlight. The inscription is “Speak Friend and Enter”, which meant that the word to make the doors open was “friend”. (ha) 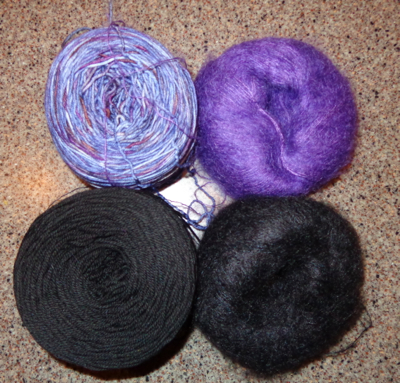 I’m knitting mine with doubled yarn, holding a matching strand of Kidsilk Haze with each of the sock yarns I’m using. The result is wonderfully squishy, soft and warm – and I like that it obscures the pattern a little bit in some kinds of light. Here’s what I’ve finished so far – they still need thumbs: 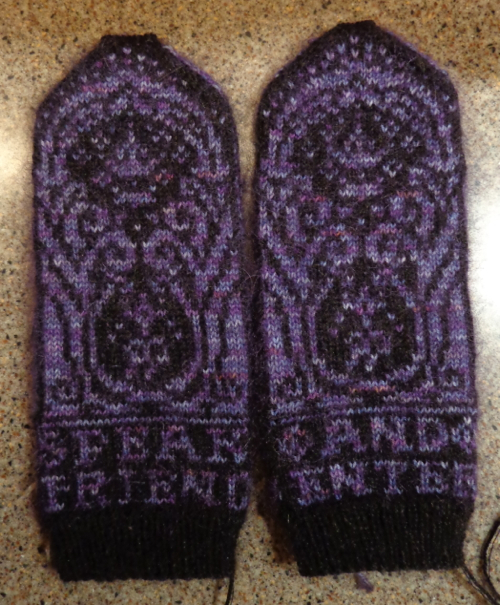 There was an idea when I started these that I might give them away as a Christmas gift, but they didn’t get done in time – and I admit I stalled on that because I want to keep them myself. 🙂 The pattern is very straightforward and well-written, and it looks like I’llhae enough yarn left to knit a second pair.

I also started to work on a lace shawl in a yarn that’s gradation-dyed to change from one colour to another over its length. I bought this yarn originally to make a cowl, but didn’t like the lace stitch so switched out for this pattern. It’s called Snow Angel by BooKnits, a new designer for me, but I’ve admired her designs for a while. The shawl blocks out to a crescent with lace dripping from the outside edge. This pattern is very well-written, both written out and charted so there’s a choice of which kind of directions to follow.

Here’s a peek at the lace so far. It looks like a lump because it isn’t blocked yet, but I think it will be very pretty. It starts with the green and will end with pink. Of course, it has beads. 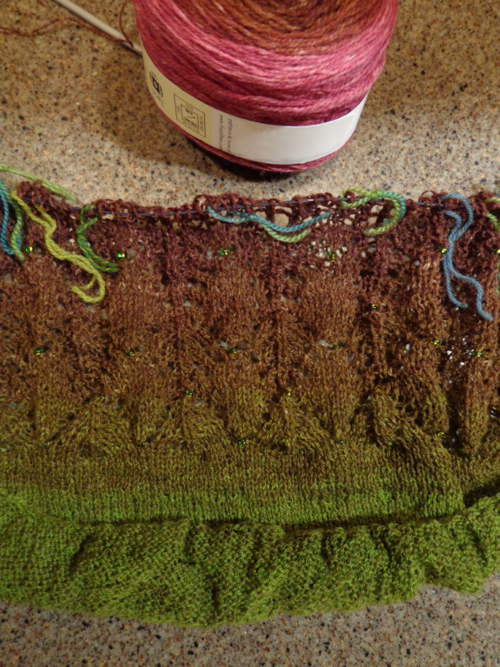 Finally, I cast on a striped scarf in Noro Silk Garden, just because I needed something to knit while watching tv. (This week, we’re watching the Miss Fisher Mysteries.) This really is mindless knitting, but the Noro makes it wonderful: 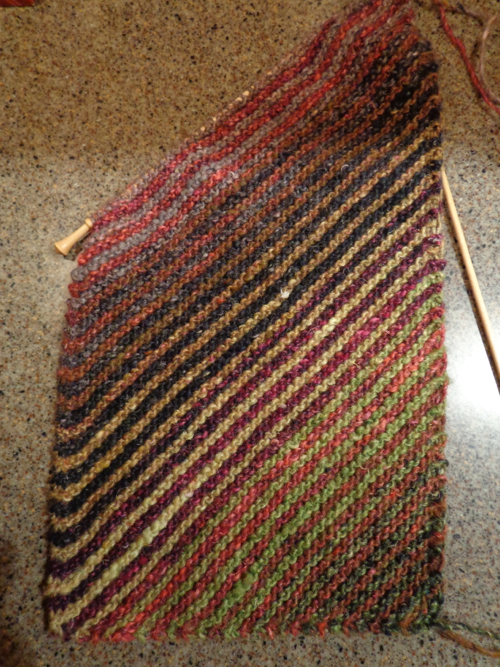 I’ve also knit one of a pair of knee socks in Fleece Artist Trail Socks, but it’s hard to get a good picture of them. Have you been doing any knitting or other crafting this month?