Love Potion #9 – which is a paranormal romance and romantic comedy – is a personal favorite of my own books. (Although it has paranormal elements, they aren’t as vehement as those what we call paranormal romance now. I think of it as a contemporary romance and romantic comedy with a bit of magic.) When it was originally published by Berkley, they commissioned the cover art from Judy York. This was the first time that I had a cover illustration that was actually a scene from the book. I was pretty happy about that, and thought the image perfectly captured the tone of the story.

I was never as happy with the type as I wanted to be. Since then, Kim Killion and I have established a look for the type on my books, and particularly for Claire’s name, so recently I asked her to update the type on the cover. Here’s the new cover: 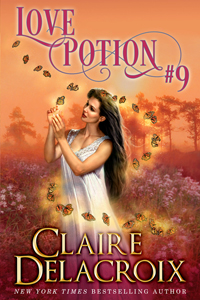 New editions have been uploaded to the online portals, and the covers on the print edition have been updated, too.

Why do I love this book so much? Well, there is the story itself, which features Lilith and Mitch both having a second chance at love. I like that a lot. I like that it’s set in Toronto, where I used to live. But my favourite element of this story is that the chapters are named after the twenty-two cards in the higher arcana of the tarot deck, in order, and that what happens in each chapter is under the influence of the specified card. The higher arcana from 0 – The Fool to 21 – The World describes a journey, and I structured Lilith and Mitch’s story to follow the path of that journey. I’m ridiculously proud of how well it worked out. (Here’s the Wiki about the Major Arcana.)

If you’re curious, Love Potion #9 will be on sale for 99 cents this weekend at Amazon US and 99p at Amazon UK. 🙂